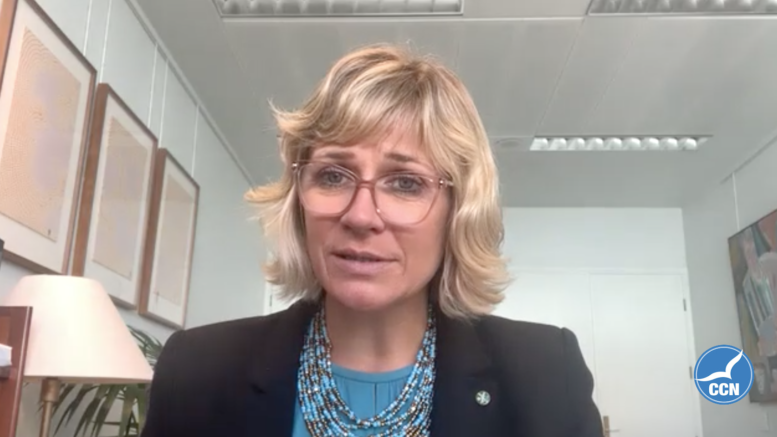 At 11am in the Federal House of Representatives yesterday, (Thursday, October 20), the Federal Member for Robertson, Lucy Wicks, rose to speak against a motion that would have paved the way for a Private Members’ Bill to permanently kill off the PEP11 offshore drilling permit.

PEP11 covers 4,575 square kilometres of ocean from Newcastle through the Central Coast to Manly.

Wicks and Prime Minister Scott Morrison have said they will not allow PEP11 to be extended under a Morrison Government but, rather than voting in line with the wishes of her community, Wicks voted with the government to stop the Bill from being considered.

Zali Steggall, Independent Member for Warringah, moved to suspend standing orders so her Offshore Petroleum and Greenhouse Gas Storage Amendment (Stopping PEP11) Bill 2021 could be given priority for debate.

“This motion must be debated today because it deals with vital issues: climate change; environmental destruction; and the fate of the economy for a significant portion of the east coast of Australia,” Steggall told the House.

“PEP11 comes as close as five kilometres to the shore in places.

“Human line of sight on the horizon is over five kilometres, so gas rigs may well be seen from our headlands and beaches.

“As recently as October 20, comments in the media by David Breeze, the Executive Director of Advent Energy, indicated that Advent has every intention to proceed with the project.

Steggall said over 60,000 people had lent their names to a petition calling for PEP11 to be stopped.

“Our ecotourism, our tourism, our hospitality all need confidence and certainty, and having this risk hanging over them is impacting their confidence in the rebuild.”

Steggall said the Member for Robertson had told the community she opposed the project.

“Yet here we are: we are still in the hands of Minister Pitt.”

“I firstly want to say very loudly that I remain firmly opposed to PEP11,” Wicks said when she rose to oppose Steggall’s motion.

“The Member for Warringah’s motion, supported by members of the opposition, this morning to suspend standing orders is not the best way to achieve this outcome that they seek.

“It only adds to the cacophony of confusion and misinformation that has been surrounding this issue.”

She acknowledged the importance of local beaches and oceans to the Coast’s way of life and repeated Morrison’s “rock-solid guarantee” that his government would not allow the PEP11 permit to be extended.

“That is why the motion before the House this morning really achieves nothing for communities up and down the NSW coast,” Wicks said.

“The best way to achieve the outcome that all of you and indeed many of us in this chamber seek is through the proper processes of government, not political stunts,” she said.

Save Our Coast committee member, Tim Heffernan, said the vote to suspend standing orders and debate the Steggall Bill was defeated 52 to 48.

“The community has made it clear that PEP11 has no place off our coast and today our elected representatives let us down by supporting fossil fuel projects over our coastline.

“Ten days away from a global climate summit and the Liberal Government not only has no plan for net-zero, but they perverted democracy by disallowing a debate on a new Bill.”

In an interview with CCN following the debate, Steggall said: “We’ve had a lot of platitudes from especially Coalition and along the coast saying that this project won’t go ahead but the reality is that the license holder is going ahead.

“The Bill seeks to basically decline the application for the license and then, which is really important, it makes it that there can be no further license approved in this area,” she said.

The full interview with Zali Steggall and transcript can be found on the news section of our coastcommunitynews.com.au website.