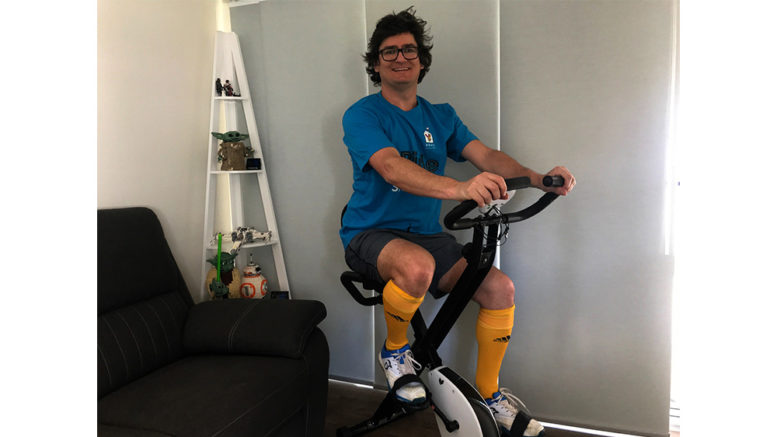 When Troy Martin of Kanwal heard about the virtual Ride For Sick Kids Fundraiser run by Ronald McDonald House Charities (RMHC) Northern NSW in September, he knew it was something he wanted to be part of.

“It’s the first year I’ve been involved,” he said.

“I‘d heard about it before but this year I decided to sign up.

“I knew of Ronald McDonald House and the work they do and having young children myself I know the importance of being able to stay close to them if they should ever get sick.”

With the annual fundraiser restricted this year due to COVID-19, Martin completed his ride on an exercise bike in his own home.

“I aimed for 100km and ended up doing 300km throughout the month, so I was pretty happy with that,” he said.

“I aimed to raise $500, being mindful that it’s been a tough couple of years for everyone, and managed to get $542.

“It might seem a small amount but every little bit counts.

“I’ll definitely be taking part next year, with expanded goals for kilometres and funds and I’d love to see more people on the Coast take part.

“I might even get to do it outside next year.

“There are some great bike paths around the region.”

“These vital funds will ensure we can continue providing a home away from home for families most in need across the region,” he said.

In addition to funds raised through the virtual ride, local McDonald’s customers also raised more than $100,000 for Ride for Sick Kids by buying Helping Bikes in restaurants across the region.

It is now gearing up for its largest annual fundraiser, McHappy Day, which will take place at McDonald’s restaurants nationwide on Saturday, November 13.

Team will cycle three suburbs in a day