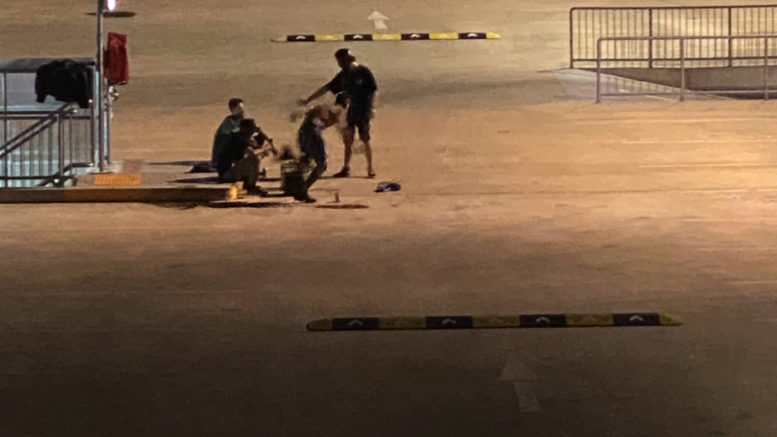 Terrigal residents are fed up with ever-growing anti-social behaviour at the Wilson Rd carpark and say Central Coast Council and police are not doing enough to combat the problem.

“In the two years since we moved from North Avoca to the Pine Tree Lane apartment complex, we have witnessed public urination, been subject to abuse hurled at us on our balcony, listened to the near-constant skateboarding and watched on as car meet after car meet rev their engines,” one resident said.

“Our pleas to Central Coast Council have fallen on deaf ears.

“The police station in Terrigal is not manned on weekends so our calls are redirected to Gosford who are too busy to help.

“Efforts to contact the security guards have been impossible as there is no contact number located within the parking complex.

“The ongoing anti-social behaviour is affecting our livelihood here in Terrigal.

“We cannot use our balcony without being watched by the daily crowds of teenagers using the roof as a social hangout.

“Our evenings are sound-tracked by the thumping dance music that accompanies the lockdown gym classes taking place on the third floor, and we are woken in the night regularly by shouting, smashing bottles and thundering car exhausts.”

The resident said no one seems prepared to take responsibility for management of the carpark.

“We are at a loss about how to fix this issue,” he said.

“Real estate in the Terrigal bowl is some of the most expensive on the Coast and Terrigal itself is one of the most desirable holiday destinations in Australia.

“How is the Council allowing such an eye-sore and magnet for anti-social behaviour to exist in its current state?

“I can assure you that we are not the only residents in this area angered by this situation.”

“Outside of these hours, calls divert to Gosford Police Station, which is operational 24/7,” Jobson said.

“Every day, a car crew is deployed to the Terrigal sector within the Brisbane Water Police District (PD).

“This forms part of the larger district response and will respond to calls for service based on priority.

“Similarly, response cars deployed into other parts of the district will attend the Terrigal sector based on prioritisation.

“Other proactive patrols and taskings are allocated daily within the Brisbane Water PD to target areas with alcohol-related violence, malicious damage and anti-social behaviour.

“In 2021, Brisbane Water PD have attended less than a dozen calls for service related to the Wilson Road carpark in response to anti-social behaviour.

“Members of the community are encouraged to continue reporting anti-social behaviour to their local police or to Crime Stoppers on 1800 333 000.

“Police continue to liaise with community stakeholders and residents to form the basis for future proactive taskings in the area.”

Central Coast Council was approached for comment but had not responded at the time of going to press.