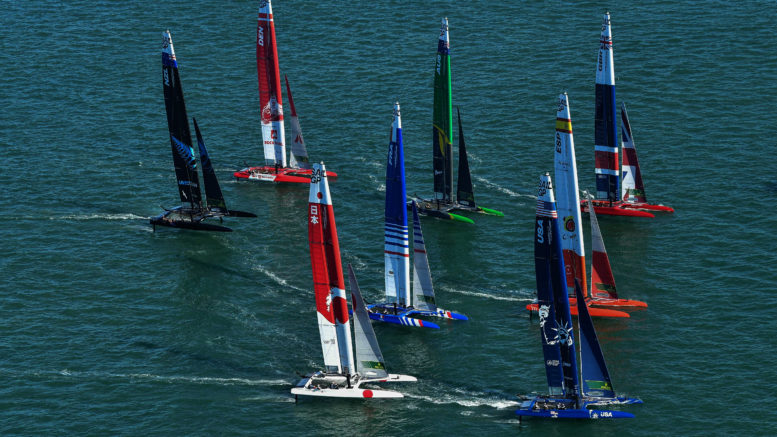 The sixth event in this season’s Sail Grand Prix (SGP) has been won by the Australian team, helmed by Gosford Sailing Club Alumnus and Olympic Gold Medallist, Tom Slingsby.

From Sunday to Monday, October 10 to 11, the eight contesting national teams raced their cutting-edge F50 Catamarans through the strong winds off the Bay of Cadiz, Southern Spain.

Beginning with five fleet races and ending with a final between the top three finishers, Singsby’s six-person crew was ultimately successful and regained its lead in the competition with two events left to go.

It’s a well-timed victory as the next event will be hosted on home waters in Sydney on December 17 and18.

The Spanish hosts were upended during a practice run on Sunday and sustained damage to their boat, forcing them to withdraw from racing.

After five fleet races, Australia advanced through to the final in first place, tallying up one win, two second and two fourth placements.

Racing against them was Britain in second and the USA in third, yet a mistake by the Great Brits – with Iain Jensen from Newcastle (NSW) as Wing Trimmer – caused them to tip within seconds of the start.

In this critical moment, the Australian team adapted well and pushed ahead of America who were disappointed not to claim the win.

The leader board saw them nestled in second place, tied with Japan at 44 points, behind Australia who defend their 2019 championship with a slender one point lead.

Britain hold on to fourth place with 40 points ahead of New Zealand with 36, Spain with 35, Denmark with 33 and France with 31.

For Slingsby and his team, the win in Spain made up for their disappointing eighth place finish in the previous September SGP event in France.

Two opportunities remain to score points in the running for the winner-takes-all $1 million prize, firstly in Sydney on the weekend before Christmas then in San Francisco from March 26 to 28.

No luck for Slingsby and Phoenix in Spain

Attempt made to entice Google HQ to Warnervale