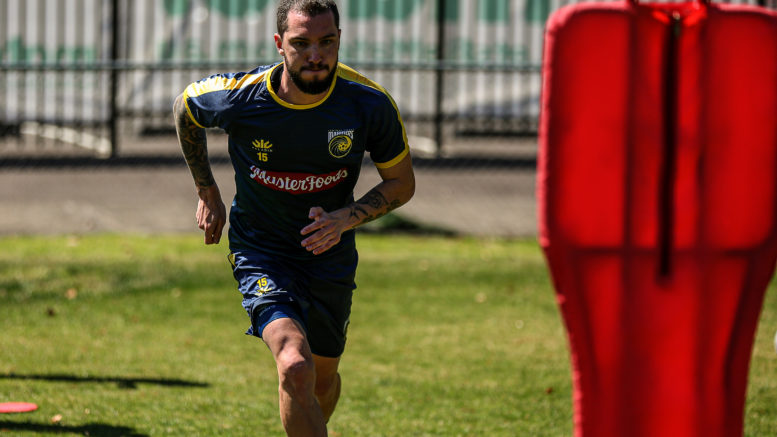 Storm Roux has rejoined the Mariners

Storm Roux has re-joined the Central Coast Mariners on a one-year deal after spending three years with Melbourne Victory.

The right back racked up over 100 appearances in yellow and navy, spanning five years between 2013 and 2018.

He will be welcomed back to the Coast after making 72 appearances for Melbourne Victory and amassing over 14,000 minutes of A-League football in total.

While not known for his goal scoring on the Coast, his recent stint in Melbourne saw him produce his best return in front of goal, totalling five in Victory colours.

Born in South Africa and moving to New Zealand at an early age, Roux played most of his teenage years in Western Australia, after migrating from across the ditch, where he made his A-League debut for Perth Glory in 2013 before moving to the Mariners after their 2012/13 success.

Roux is very keen to get back into the swing of things with the club he is so familiar with and a coach that he played alongside in the past.

“I am very happy to return to the Mariners where I started my career and spent so much of my time,” he said.

This club means a lot to my family and I and I’m excited to be a part of Monty’s [Nick Montgomery] squad and build on what was achieved last season.”

“I think bringing Storm back to the Coast will add competition for places, plus his experience and good character will be a great example to our younger players,” he said.

“At 29, he is at a good age to continue his development and improve areas of his game, giving him the licence to be a key player for us once more.”

Mariners Head of Football, Ken Schembri, said racking up 170 A-League appearances was a great testament to Storm’s consistent performances over the years.

“With only a few vacancies in our squad we have been searching for an available, experienced player to help our younger squad members, plus someone who can give us more depth in defence, and I believe we have done that with Storm,” he said.

Roux will join up with the squad immediately ahead of the opening weekend of the A-League Men’s season against Newcastle Jets on November 21.

We sing for yellow

Be the first to comment on "Roux returns to strengthen defence"