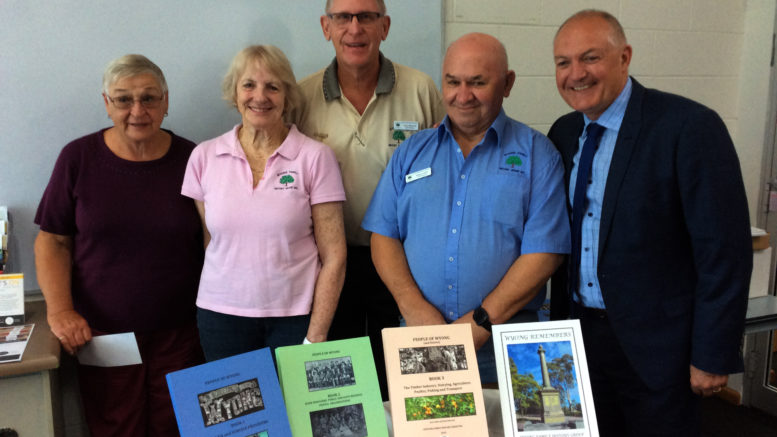 Delving into the bygone days of Wyong and surrounding suburbs has unearthed some fascinating stories which are now being shared by Wyong Family History Group in a series of five books called People of Wyong.

The idea for the book series came from two members of the group, Anne Cook and John Selwood, who have spent the past four years working on the project.

They thought an obvious place to start their research was with the stationmasters of Wyong and the opening of the railway line in Wyong in 1887 which had a significant impact on the growth of the town.

Then they turned their attention to postmasters of Wyong, which snowballed into researching police sergeants, bank managers, church ministers, shopkeepers, and service providers such as the fire brigade, doctors, chemists and dentists.

They discovered some interesting facts about Wyong along the way.

For instance, the town had a female dentist in the 1930s, and at one time Wyong was one of the largest producers of citrus fruits, eggs, timbers and apples in NSW.

One of the largest employers in the community was the abattoir.

At Wyong Creek there was a beekeeper that sent queen bees to the Middle East in wooden boxes using timber from Yarramalong.

The books include historical facts, snippets from local newspapers, as well as personal interviews with residents of the area to give an insight into the history of Wyong.

Other members of the Wyong Family History Group assisted Cook and Selwood to bring these books together, with Marilyn Cridland indexing them, and Roger Lewis completing the final preparation prior to printing.

Lifelong member of the group, Lynda Smith, said that Cook and Selwood started working on the books three years ago.

“The first three books were launched in May 2019, and we were planning to launch the last two this year, but COVID restrictions have forced us to reschedule until early next year,” she said.

“This isn’t the only launch that the group has had to postpone, we were meant to launch a CD collection of the Anglican Church records last year,” Smith said.

She also said the pandemic had resulted in over half of their members leaving the group.

“A lot of our longtime members chose not to renew their membership and we haven’t had any new members this year, so we’re running out of money trying to keep all of our subscriptions to all of our databases we use.

“We’re trying to launch new ways for people to use our service like using Zoom and telephones and emails instead of face-to-face initial meetings, but either we don’t have the technology or the people who are enquiring about their
family history don’t have
the technology.

“Usually what happens is researchers organise a meeting in our rooms, and they sit down and discuss what the person is looking for and they bring as much information as possible such as family stories and certificates and decide whether they want to find out about their paternal or maternal side.

They set a timeframe and then our researchers go and put together a package of everything they can find,” Smith said.

The Wyong Family History Group’s rooms at The Cottage in Wyong will be re-opening on October 26.

All visitors must be fully vaccinated, and bookings are required.

People of Wyong can be purchased on the Wyong Family History Group’s website, where customers can place an order and have it posted to their home.