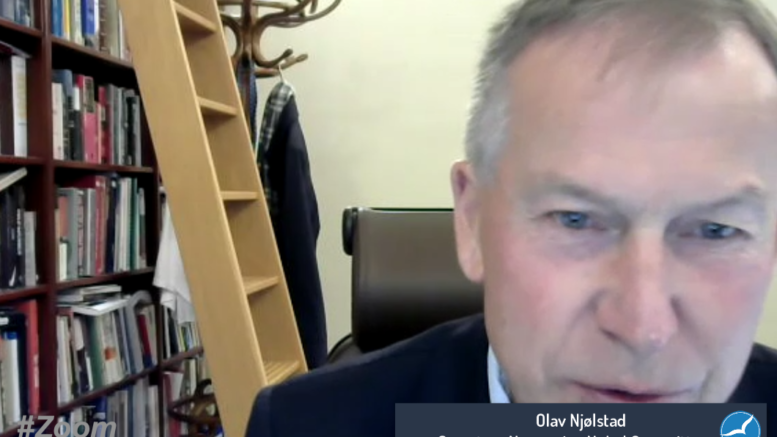 Olav Njølstad, Secretary of the Norwegian Nobel Committee in a zoom interview with CCN.

The team at CCN is delighted to report that this year’s Nobel Peace Prize 2021 has been awarded to two journalists in the firing line for freedom of expression in their respective countries of Russia and the Philippines.

According to Reporters Without Borders (RSF) 50 journalists across the world were killed while working in 2020 and each year their work to uphold the community’s right to information gets more difficult.

The journalists, Maria Ressa, from the Philippines and Dmitry Andreyevich Muratov of Russia share the million dollar prize in the words of the Nobel Peace Prize committee “for their efforts to safeguard freedom of expression, which is a precondition for democracy and lasting peace”.

The Committee, made up of members appointed by the Norwegian Parliament noted that the two journalists were “..representatives of all journalists who stand up for this ideal in a world in which democracy and freedom of the press face increasingly adverse conditions”.

It said free, independent and fact-based journalism served to protect against abuse of power, lies and war propaganda.

“These rights are crucial prerequisites for democracy and protect against war and conflict.

“The award of the Nobel Peace Prize to Maria Ressa and Dmitry Muratov is intended to underscore the importance of protecting and defending these fundamental rights.

“Without freedom of expression and freedom of the press, it will be difficult to successfully promote fraternity between nations, disarmament and a better world order to succeed in our time.”

This year’s award of the Nobel Peace Prize is anchored in the provisions of Alfred Nobel’s will that funded the first prizes in 1901.

Alfred Nobel was one of the world’s most successful industrialists and his last will and testament created the Nobel Prizes in five categories: Physics; Chemistry; Medicine; Literature; and Peace.

A sixth prize in Economic Sciences was funded by the Swedish Central Bank in 1968 though it strictly is not a Nobel Prize but a prize of the Royal Swedish Academy of Sciences using the same principles of the Nobel Prizes.

All the prizes are formally awarded in the second week of December in Oslo and Stockholm.

This year’s festivities will be a mixture of digital and physical events, many will be streamed and possible to follow online.

Go to nobelprize.org for details.

The full video interview and interview transcript is available at the video section of the CCN website.

Scott asks for certainty on return to local democracy

Direct democracy ‘our only hope’