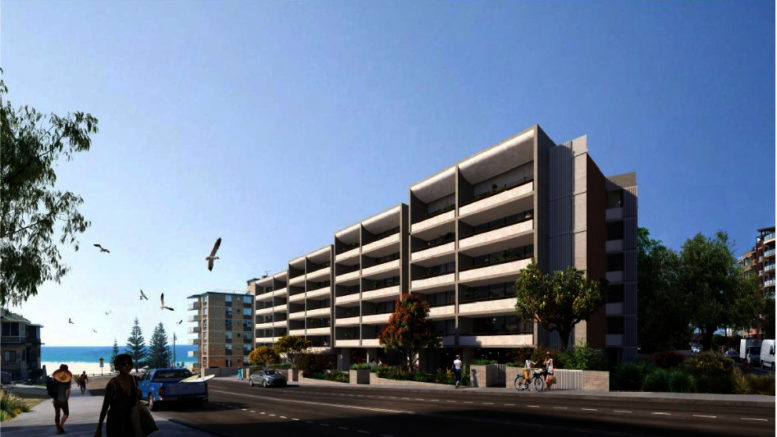 Perspective of the modified development

The Local Planning Panel deferred a decision on a block of units at The Entrance pending detailed evidence from the applicant demonstrating the original consent had physical commencement and had not lapsed.

The applicant was given 28 days to provide evidence of commencement.

The proposed six-storey development for The Entrance that was first approved in 2006 went to the Local Planning Panel on September 23, with a series of changes to the original plans.

The applicant wanted to gain another 11 units in a reconfiguration to total 56 units and to increase the height of the building by 1.23m.

It went to the Planning Panel with a recommendation from Council to approve the changes.

“It is considered that nothing has materially changed and that there has been no increase in impacts from those considered under the original assessment,” Council said.

Nearby residents disagreed and four people addressed the Panel objecting to the proposal.

The minutes of the meeting are now public and show the panel wants:

• A copy of the deposited plan of consolidation;

• Evidence from the surveyor as to any physical work they undertook on site;

• Evidence that the demolition took place prior to the lapse of consent, including copies of receipts and dated aerial photos showing demolition before consent lapsed.

The Panel said the applicant had not adequately demonstrated that the (original) consent had physical commencement.

“In this regard the Panel does not rely on the letter provided by Council dated September 29, 2009,” the Panel said.

It said its reasons for the decision included minimising any adverse impacts on the amenity of adjoining residents.

During the period of public exhibition, Council received 25 submissions.

They raised concerns about the height, bulk and scale, overshadowing, views, privacy, noise, landscaping, apartment mix and the original consent.

Council said shadow diagrams indicated a minor increase in building height and greater articulation on the northern and south-western facade will result in some additional overshadowing to adjoining properties.

However, it said the originally approved building generally overshadowed the south-eastern side of the adjoining property at 50-54 Ocean Pde.

“The overshadowing impacts are generally the same as that which was originally approved with some minor increases and decreases in overshadowing due to the modified roof structures,” Council said.

It was the same with the views.

“The impact to views was assessed in the original assessment of the development,” Council said.

“Views from 50-54 Ocean Pde towards The Entrance foreshore and bridge are significantly affected as a result of the approved development.

“All levels of 50-54 Ocean Pde would be affected by the erection of the building.”

Council said it was unable to re-assess impacts that had already been approved.

“Consideration of the extent of the impact is focused on any additional impact to the views from the proposed modifications,” Council said.