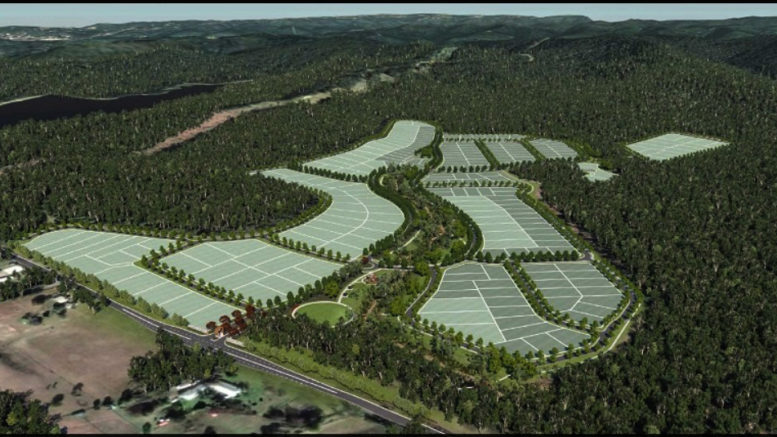 Public comment is being sought, under the Environment Protection and Biodiversity Conservation Act (EPBC Act), in relation to a development proposal to turn Old Mardi Farm into a 246-lot rural residential housing estate.

A Biodiversity Development Assessment Report was lodged with Central Coast Council as part of the development application, yet more information is being sought about threatened ecological communities and threatened species.

Documents for perusal (EPBC 2021/8968) will be available for comment until Tuesday, November 2 online at stevensgroup.com.au

Plans are to develop a lifestyle estate on land owned by Central Coast businessman, Laurie Denton, at 414 Old Maitland Rd, Mardi, in partnership with the Stevens Group.

They say the project will be the only one of its kind on the Coast, with walking trails, central park and backing on to natural bushland settings for extended walks.

A development application has been lodged with Central Coast Council to subdivide the huge parcel of land
into two lots.

One lot of 55.68ha would be rezoned as environmental conservation (E2) land, with the remaining 168ha further subdivided into 246 residential lots along with landscaped parks, cycleways, barbecue areas, three-kilometre walking trail and a “feature fireplace”.

The E2 land is to be the subject of a Biodiversity Stewardship Agreement under the Biodiversity Conservation Act 2016.

The Coast Environmental Alliance (CEA) is opposing the subdivision due to its impact on the environment which it claims will see the removal of critically endangered fauna, koala habitat and vulnerable frog habitat.

CEA said that while the developer agreed to zone 168ha of land that backs on to Ourimbah State Forest as E2 land, there are still irreversible direct and indirect impacts on the native flora and fauna.

This includes clearing or modification of vast tracts of land, removing or disturbing native animal habitat, and the potential to impact on water quality across the floodplain, as well as contaminating the downstream aquatic environments within Deep Creek which leads into Tuggerah Lakes.

The 224ha parcel of land, at the base of Ourimbah State Forest, has been the subject of a rezoning proposal since 1999 and went before a NSW Planning Gateway determination in 2013 before being approved in 2018.

That approval was never acted upon and this new DA will go to the Hunter Central Coast Regional Planning Panel for determination.

Plans are to develop over five stages with rural residential lots ranging from 900sqm to 1500sqm and commencement within 24 months.

While the site represents the only residential land west of the M1, all services are available to future residents within a few kilometres, the DA said.

Plans include a grand new entry/exit road about 200m north from the farm’s current driveway on to Old Maitland Rd and a second emergency access would be provided towards the south on Old Maitland Rd for
firefighting purposes.

A walking trail and seating nodes have been provided throughout the development to take advantage of the natural amenity provided by the surrounding E2 lands as well as the extensive planting proposed within the landscape plans.