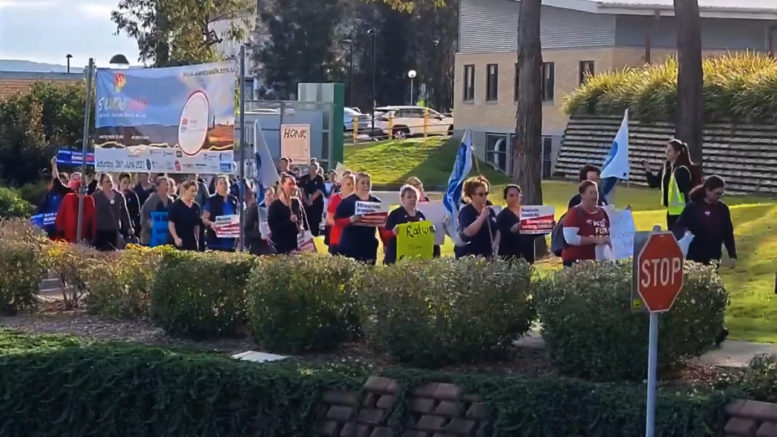 Nurses and midwives hold grave concerns for safe patient care in Wyong Hospital’s new Block H building, after serious staffing shortfalls were not addressed before moving into the new facility earlier this month.

The NSW Nurses and Midwives Association (NSWNMA) has requested urgent briefings with Central Coast Local Health District and in a letter to Health District Acting CEO, Brad Astill, the nurses described the staffing levels as “a disaster waiting to happen”.

“While the Local Health District focussed on moving into the new building, our members have been grappling with how they’re supposed to deliver patient care safely, alongside rising nurse vacancies and a fatigued casual staffing pool,” Falconer said.

“There are almost 20 full-time equivalent (FTE) vacancies in the emergency department, while unplanned leave is often not replaced on many wards, leaving the remaining nurses short-staffed.

“This is not sustainable, and it compromises the ability of nurses and midwives to deliver a safe level of care to our patients.

“Health District management was alerted to our concerns at numerous Reasonable Workload Committee meetings, yet they pressed on with shifting patients and services into Block H to meet a preferred timeline.

“They’ve simply transferred these staffing issues over as well.

“As an immediate solution, we’re calling on the Health District to cap the use of surge beds on several wards inside Block H, until nurse staffing levels are increased to safely meet the demand.

“We’ve been working tirelessly throughout the pandemic to keep our community safe, but nurses and midwives feel unsupported by the Health District for failing to listen or address these concerns,” Falconer said.

She said the NSWNMA’s campaign for nurse-to-patient ratios on every shift and safe staffing levels in maternity units would help to address
this issue.

Wyong nurses held a two-hour strike in mid-June over the same staffing issues.

Shadow Minister for Central Coast, Wyong MP David Harris, spoke in Parliament on October 20, welcoming the $200M hospital upgrade but he made the point that “it’s not just about shiny new buildings; we need staff.

“I have been supporting their campaign to ensure adequate ratios and manageable workloads for our local health staff so they can deliver optimum care,” he said.

“He said they had started hiring the additional staff necessary to make the new facilities work … and we will continue to work to ensure there are sufficient staff to serve our growing community,” Harris said.

“We must make sure our community not only has fantastic hospital facilities, but also has the right amount of staff to ensure that the necessary services are delivered appropriately.

“Our nurses and health staff have been under great strain, even before COVID, and we need to support them because over-worked staff can’t provide the best outcomes for the community,’ Harris said.

CCC approached the Local Health District for a response but they were unable to meet our deadline so we will report their statement in the next available edition.