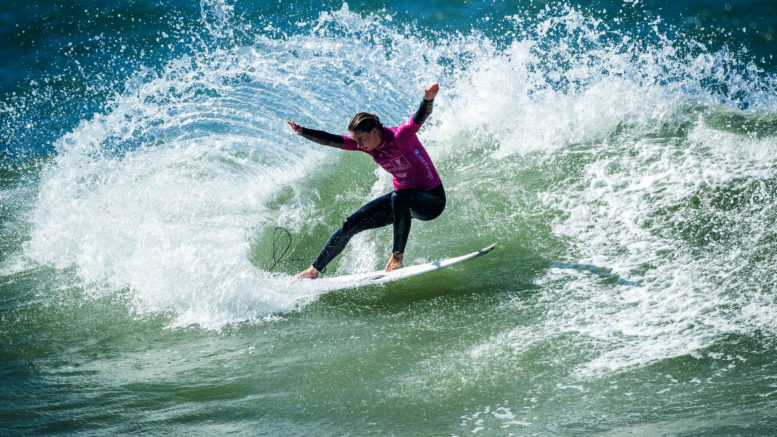 The Vissla Pro Ericeria in Portugal has come to an end without lasting success for the three Central Coast competitors, victory in the end coming to Hawaiian’s Ezekiel Lau (Men) and Luana Silva (Women).

Although advancing through their opening heats, Shelly Beach’s Molly Picklum and Avoca Beach’s Wade Carmichael were both eliminated in their second bouts.

Avoca’s Macy Callaghan advanced up to the opening one-on-one heat in the Round of 16 where she was beaten in classy fashion by 16 year old Hawaiian, Bettylou Sakura Johnson.

From Sunday to Saturday, October 3 to 9, the surfing conditions gradually improved within a three to six foot range, becoming more powerful and better formed by the start of the finals series half-way through the competition.

With the early competition waves often proving difficult to read, the heat winners were often the surfers most capable or fortunate in picking out the best scoring options.

In the opening Round of 64, Picklum was able to set herself more than four points apart from her European competition with a heat high score of 7.67 and a second wave of 7.10.

Two strong early waves came for Picklum in the following Round of 32, granting her a two-wave score of 12.80 and the lead early in the heat.

With six minutes to go, Brazilian Summer Macedo overtook her with a 7.57 wave and managed to maintain this lead.

Brazilian Silvana Lima then picked out the best wave of the heat, scoring a 8.50 to soar from fourth into second place and push Picklum out into third.

The score was announced by the judges with only 30 seconds remaining and there was no further chance for Picklum to take on the two Brazilian leads.

Carmichael was successful in his opening Round of 96, sliding through in second place behind France’s Kauli Vaast.

His next heat was more difficult, compounded by an opening 9.33 wave from fellow Aussie competitor, Cooper Chapman, who went on to place first.

Fellow Avoca surfer, Macy Callaghan, was looking strong after two successive wins but was then outmatched by an in-form Sakura Johnson, who posted three 9+ waves in a row to outscore Macy by 18.99 to 14.83.

In the end, 10,000 qualification points for the upcoming Championship Tour were awarded to the two winners, with Macy picking up 3500, Molly earning 2000 and Wade securing 650.

All three surfers will hope for better conditions and performances throughout the upcoming Pro France to be held between October 16 and 24 on the South-Western French Coast, in Landes.

This will be the third of four stops for this season’s Challenger Series and another 10,000 qualification points will be awarded to the male and female victor.