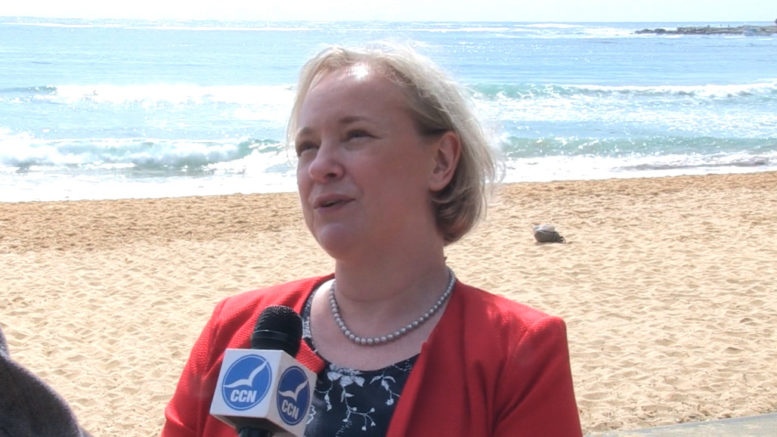 Vania Holt, New Liberals candidate for the federal electorate of Robertson, has been critical of the Morrison Government’s failure to follow through on their promise to permanently stop the PEP11 offshore oil and gas drilling proposal.

“Any kind of ecological disaster would break everybody’s way of living.

“We’re a coast, we’re a a surfing nation where a surfer goes … and we really need this beautiful beach to survive and once it’s gone, you can’t bring it back.,” she said.

Holt said she was concerned that the Minister responsible for making the decision to extend PEP11, Keith Pitt, had been elevated to Prime Minister Morrison’s Cabinet which meant he probably had “a little more power” than the Member for Robertson, Lucy Wicks.

“We can’t trust the Liberal Government to say no to these people, even if they’re going to elevate the National Party of Queensland to make a decision on our Coast,” she said of Wicks’ and Morrison’s promises that PEP11 would not continue.

Holt said, if elected to represent Robertson at the next federal election, due before May 2022, she was likely to work with other independents to ensure the permit did not proceed.

“Wicks can’t – she votes with the government every single time.

“The proponent Asset Energy and their partners have said to us on camera that they don’t care what the Prime Minister says.

“They are starting to go ahead, employing and issuing contracts already – is that an indication that something is going on here that we, the public don’t know about?

“It seems a bit strange that a company would be tendering for works yet Scott Morrison and the Liberal National Party has said, ‘Oh no, no, we’re not going to go ahead with this’.

“Why would a company be spending all this money on starting to tender for businesses etc to start this process when the government has said they’re not going to go ahead?

“Wouldn’t the shareholders be very upset with the company saying, ‘Oh, we’re going to waste all this money on something that’s not going to go ahead’?

“I’m a bit concerned that perhaps it is going to go ahead.

She said the recent gas leak in California showed why PEP11 could not go ahead.

“They can’t clean it up; I’ve been looking at how you can clean up gas and oil spills, and none of the technology is there to eradicate.

“It’s just not a risk that anyone should be taking, not on the east coast of Australia – we all live here, this is where the majority of Australians live.”