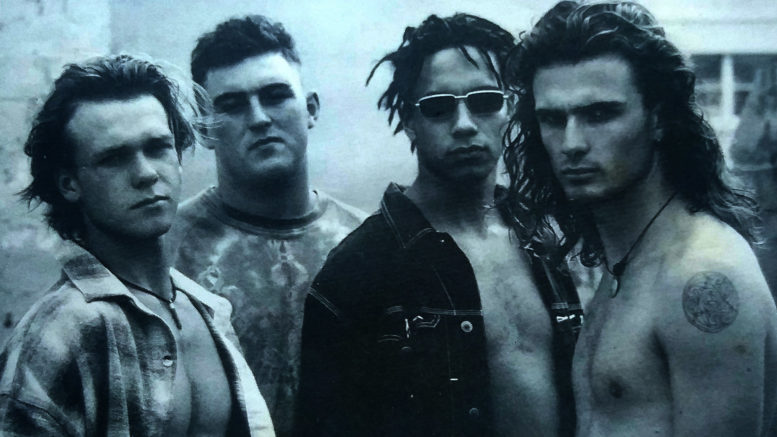 The band in the early 90s with original drummer Matt Dorahy

More than 25 years after they first made a splash on the Central Coast music scene in the early 90s, three original members of the band Malakye Grind have reunited to put out a new album, with Music for Midnight People debuting at #47 on the Australian iTunes charts in mid-September.

The album also made its way into Top 20 Australian Streams via the Play MPE charts along with Baker Boy, Birds of Tokyo and Paul Kelly.

Band member, Rob Smith, said the album was completed in the midst of COVID-19 lockdowns across two continents.

Based in the US since 2014, Smith said the new album combines a lot of different influences experienced by band members over the years.

“We had the luxury of time and we’re really happy with the way it turned out,” he said.

“With no deadline, we could get everything right and make the album the way we wanted it made.

“We were a bit surprised when it went into the charts.

“We’re just a band from Gosford.”

Smith joined forces with guitarist, Pat Burke, and bass player, Brook Rees, in the very early 90s, when they were all high school students, Smith at Henry Kendall and Burke and Rees at Gosford High.

“We formed to enter YIPA and just went from there,” Smith said.

The band went on to score successful releases and sold-out home turf concerts and is considered by many to be one of the original pioneering bands of the Central Coast music scene.

Receiving its first major radio airplay with the single Mind Buzz, the band played hundreds of shows in Australia gathering a following of committed fans before disbanding, with members moving on to different areas of the Australian and US music industries.

Smith, who also featured in several Gosford Musical Society productions in the 90s, relocated with his family to Los Angeles in 2014 to pursue work opportunities.

“The band got together for a one-off gig at Erina Leagues Club in 2011 and we’ve stayed in touch ever since,’” he said.

“Pat and I kept doing rough demos and Brook had written a few songs; over the last 10 years we had probably done demos of 30 songs between us.

“Just as COVID was starting to hit in Oz the first time (in early 2020) Brook and Pat were going to get together to do some tracking but that all went out the window, with Brook now based in Queensland and Pat still on the Coast.

“But due to the wonders of technology, they were able to get some demos together remotely and I was able to add the vocals from LA and we had something that looked like the bare bones of an album.

“Brook secured Dave Sanders from Byron Bay as session drummer and we had the album mixed in Sydney, with none of us in the same room at the same time.

“Somehow the chemistry has remained intact.”

Smith said the band members were still writing songs and he hoped to get back to Australia for some live gigs in the not-too-distant future.

Meanwhile the band has signed with UK-based music production label Extreme Music (Sony Publishing) for its music to be used on film and television in the US and the UK.