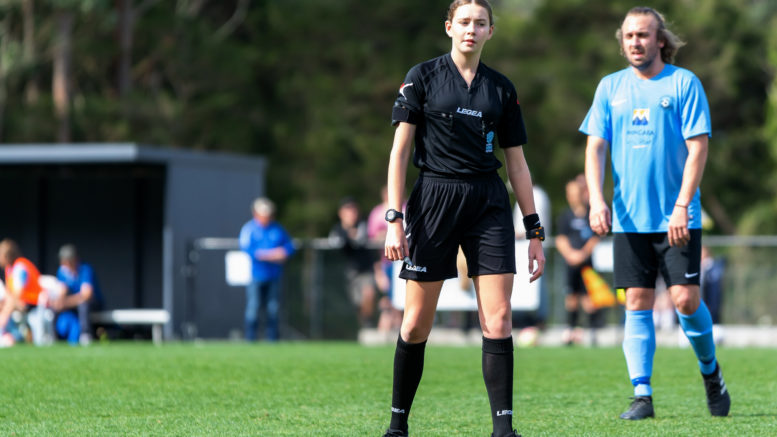 On the precipice of the most expansive season in the history of Australian women’s football, the Central Coast’s Mikayla Ryan has been confirmed as the A-League Women’s fourth official.

Now residing in Gosford, Ryan first became a referee cadet at the age of 12 whilst playing junior football with the Woongarrah Wildcats.

Since then, she has expanded her resume to include both men’s and women’s first grade games with Central Coast Football and Football NSW, including assignments within the National Premier League One.

The confirmation will see her take on important roles as fourth official, including the organisation of substitutions and extra time, as well as working with the on-field referee’s to make game-time decisions.

For Ryan, her assignment was unexpected but welcome news.

“Earlier this year I was told that I was up for nomination, but because of how young I am I didn’t think I would get this opportunity so quickly,” Ryan explained.

“I definitely wasn’t expecting it – it was a surprise then to get that phone call and be told that I had got the promotion.”

Mikayla will have the opportunity to use her experiences as a fourth official to help her grow into her broader goal of becoming a centre referee.

“When you get to Football NSW you sort of decide what path you want to take: whether you want to be a referee or an assistant referee,” continued Ryan.

“I think I’m more drawn to this role because I’m more involved in the game, I can make those big decisions because I’m right up close.

“To get there, I definitely have to be able to perform and excel in my fourth official role, so this means making sure I can control the benches well and help out the other referees when I’m needed.

“So being a fourth official hopefully will lead me to becoming the centre referee in a few years… hopefully!”

Considering that the A-League Women’s competition hasn’t yet assigned Video Assistant Referees positions this season, Ryan and the other adjudicators will always need to be at their best.

This will be a challenge for Mikayla, but one which she sees herself as capable of completing.

“There’s definitely lots of high-pressure situations going on in games.

“I think one of the things I fall back on is I know how much I’ve worked, trained and studied, so I know I can trust myself and that I know what I’m doing.

“When I do have to make those big decisions and everyone’s blowing up, I just have to think about how I know I’ve worked hard to reach this point and that I’m going to do what I think is right at the time.”

So far, the first four rounds of the Women’s A-League have been confirmed, with Friday, December 3 featuring the opening two matches.