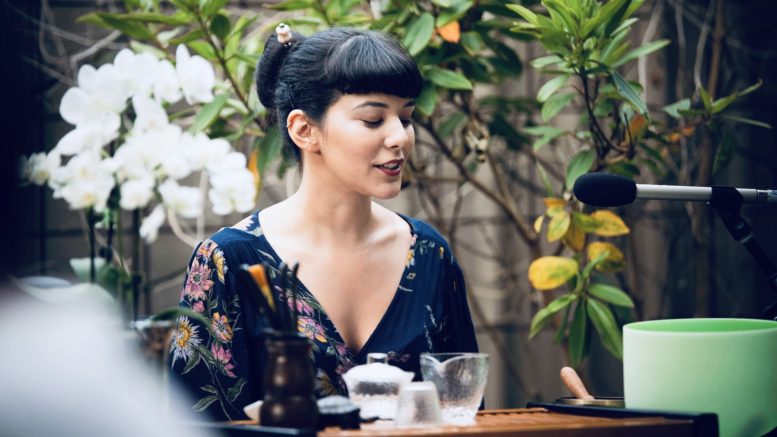 Mafalda Mountinho has landed in the peculiar and curious profession of a tea master. Coming from a background completely unrelated, Mafalda came to Australia to do a BA in product design originally before embarking on her Journey with tea and its history.

Many cultures have a history with tea, the way they serve it, the type they drank and what it meant to them.
Mafaldas connection to tea began with her mother in Portugal, but she studied onwards and now serves the traditional Chinese way of Gongfu Cha.

“My mum really treasured loose leaf teas. She always had a tin of loose leaf tea that was reserved and kept for a few special guests, or special occasions. It wasn’t every day tea”

“Tea was a subject I never saw an end too, the more you read about it, the more you realise you know nothing. I started reading more and started brewing it and it opened doors I never expected.

We think of tea as an everyday thing to share, but it’s very much deep rooted in the human experience, its 5000 years old at least, the way we drink it, but archaeologists have even found that Neanderthals used to chew on the leaves as well.”

“The tea plant, Camellia Sinensis, is native around Asia, but the Portuguese went to china and established a commerce relationship with it in the 16 hundreds”

“Gongfu Cha literally translates to making tea with skill or intention; It’s a folklore tradition rather than a ceremony. People do it literally in the street, in their homes, bus stops or cars, wherever they can sit they do it”

Mafalda explained how the tea we all know and love, black tea, green tea, white tea, all comes from the same plant, Camellia Sinensis, it’s just that the leaves are picked at different times, although there are different varieties of this plant in different countries.

What are the benefits of tea I asked Mafalda.

“There’s a lot of studies on tea. It lowers cholesterol, helps with your gut bacteria and helps harmonise your gut flora. It has a particular amino acid called L-Theanine and its chemical composition is very similar to a lubricant we have in our brain. When you drink it, it crosses the blood brain barrier and attaches to our Canabanoid receptors which induces Alpha brain waves, which is a state that is similar to meditation or when you are focusing.”

Is that way tea and meditation go hand in hand I asked?

“Absolutely. If you look back in history at the Zen movement, Confucianism, Daoism, or Buddhism, they all used it. Tea was known as the Elixir of life because it was through tea you could mediate without falling asleep”

“Tea was given the credit for the evolution of their societies. It allowed people to discuss in pragmatic ways. It allowed people to be humble, no matter who you were, if you entered a tea house all the weapons had to be left outside, and everyone was equal. Even art, poetry and music developed out of the co-evolution with tea.”

“Tea is non-threatening, it allows you to become empathetic, it makes you drop you guard”

“The caffeine in the tea plant is very different to coffee. In coffee it produces an addictive quality with a sharp spike which you don’t get with tea. Tea releases caffeine in a bell wave throughout the whole day. You have signs of withdrawals if you don’t have coffee. People get addicted to tea not because of caffeine, but because of the ritual. It’s a mindfulness exercise, especially in a ceremonial setting, it’s an introspective experience, you can re-brew over and over again, and you become very involved without even realising.”

Mafalda sells tea through her website called Casa De Cha. You can also organise for her to come and serve you tea in a traditional setting for just yourself or a number of guests.