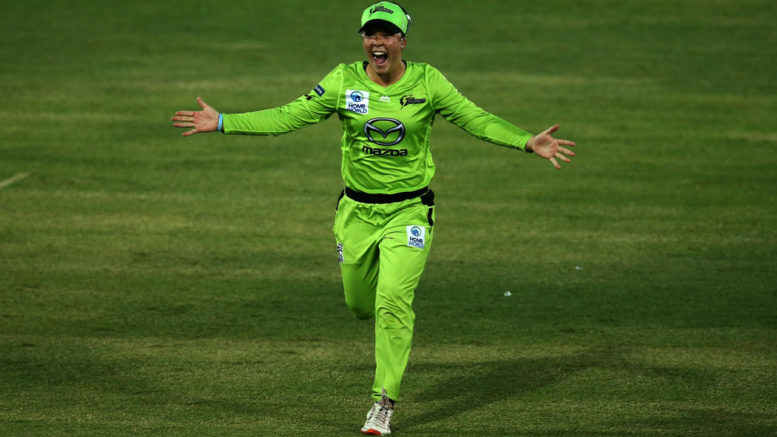 Sydney Thunder player and Central Coast local, Lauren Smith, is gearing up for a new season of Women’s Big Bash League ready to face the Sixers and Scorchers on October 30 and 31.

The 25-year-old from North Gosford said she was excited to get out on the pitch to play the game she loves.

“This is my second year with the Thunder, before signing here I played five seasons with the sixers.

“I’m a bowling all-rounder, and I also bat.

“Preparing for this season has been a little different, leading into the new season we have been training four times a week.

“These sessions usually last about two hours, and we also do two running sessions and two gym sessions a week as well,” Smith said.

Smith said that her older brother and her dad got her interested in cricket, as the family would often play games of backyard cricket together.

“Growing up we were always playing cricket, and since then I’ve played for The Entrance Cricket Club, Mountains Kariong Cricket Club and Umina Cricket Club before being signed to the Sixers.

“What really drew me to cricket was it being a team sport.

“I’m a social butterfly so I love to get around to everyone and I love being out on the field having a great time.

“For me, growing up I didn’t really know about women’s cricket, but I really liked Michael Clarke.

“It must have been the blonde hair that got me interested, Crystal Stiryker was a big role model for me.

“When I’m playing I prefer to bowl as I think that is my main asset.

“I love to field as well and I’m usually in the hot zone where most of the balls end up, I love it,” Smith said.

Smith said she would love to represent Australia.

“I would also love to play in more tournaments around the world such as the UK for their tournament and in India.

“I would also like to set an example to girls that want to play cricket to show them that anything is possible,” Smith said.

The new season of Women’s Big Bash League started on October 14 and Smith said the season was congested with some teams playing multiple games a day.

“The season goes for two months, and for the Big Bash, we face each team twice and there’s eight teams in the tournament.

“It’s a pretty congested time, but I think it’s great that we’ll be on prime-time TV for everyone to watch and enjoy,” Smith said.

The Women’s Big Bash League, which started in 2015, runs until November 27, and will feature 59 matches between the eight teams.

The matches air on Channel 7 and Fox Cricket.