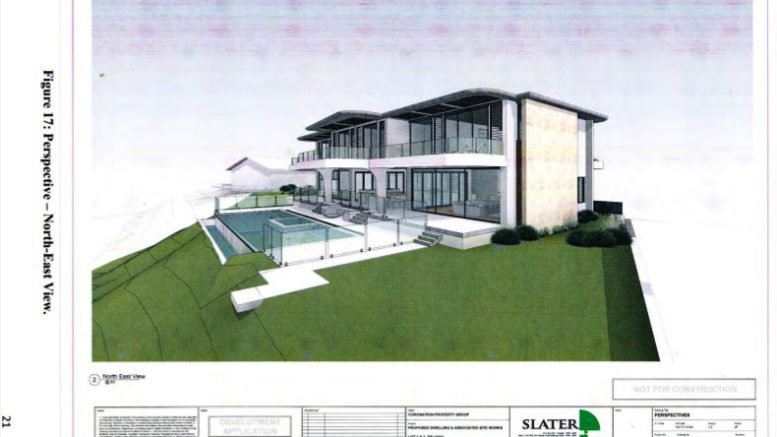 A plan of the proposed dwelling

As the Wamberal Seawall Advisory Taskforce continues to explore options for a permanent solution to beach erosion, Council has received two development applications for three blocks of land at 85-89 Ocean View Rd, one for a house and pool across two blocks and one for a seawall across the three blocks.

Permission has already been granted to build a house on the first block.

The proposal for a second house, presented by applicant Slater Architects, envisages a seven-bedroom, three-storey home built across two of the blocks.

Six of the bedrooms have their own en suite bathrooms and are on the third floor along with an office, roof gardens and a balcony.

The seventh bedroom is part of a ground floor guest suite and kitchenette.

The proposed dwelling is located seaward of the coastal building line for the locality adopted in Council’s Development Control Plan ( DCP).

“It is established in the accompanying coastal engineering advice that the DCP coastal building line is not appropriate to apply to the subject land, as it was derived assuming an entirely sandy subsurface, which is not the case due to underlying clays,” the development application said.

“With appropriate structural engineering input, and following the foundation recommendations herein, a structure can be constructed at an acceptably low risk of damage at the subject property,” the application said.

The applicant said the proposal was consistent with the Development Control Plan (DCP) which permitted dwellings of three storeys on steeply sloping sites with the basement level generally below existing natural ground level.

The applicant said it did not significantly contribute to the bulk and scale of the house when viewed from the beach or neighbouring properties.

The second development application proposed a privately-built sea wall and beach access across the three blocks.

“The proposed sea wall at 85-89 Ocean View Drive will remediate an exposed eroded earth escarpment with a stepped landscaped protective sea wall, which will improve the visual amenity of the beach backdrop at this location,” the application said.

“The visual appearance of the sea wall will be softened by a series of landscaped terraces … thereby mitigating the bulk, scale and visual exposure of the proposed structure.”

The applicant said a variety of structural and remedial measures have been taken by landowners along the length of Wamberal Beach protect their properties from coastal erosion.

“There is no particular theme adopted in regard to the construction of existing retaining/protective walls, with a variety of construction techniques/materials employed for this purpose, including sheet pile construction; gabion protection; rock protection, shotcreting; concrete blocks; and timber retaining walls,” the application said.

The advisory taskforce said at its September 7 meeting that “the existing environment at Wamberal Beach is not a prime example of a healthy, vegetated dune.

“It requires significant ad hoc/emergency works which are often unsightly and not in line with community interests,” the minutes said.

The taskforce is due to be dissolved at the end of February 2022 but the September meeting noted that there was a considerable body of work still to be done to progress an outcome for Wamberal.

Taskforce Chair, Phil Watson, Council CEO, David Farmer, and Member for Terrigal, Adam Crouch, were to consider extending the tenure for another 12 months.