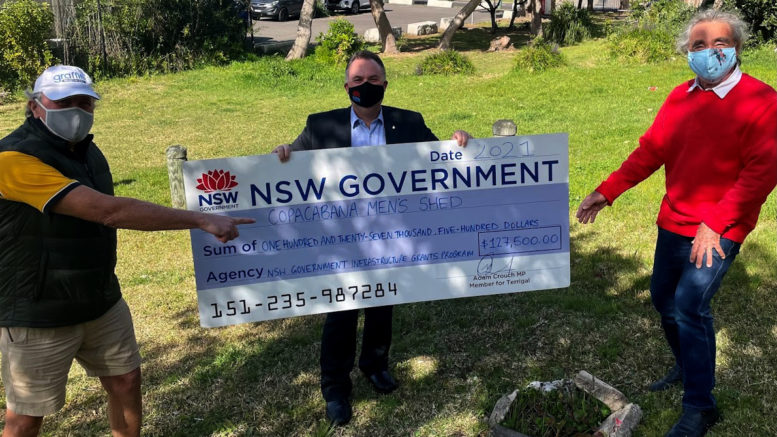 A new building at Copacabana Men’s Shed is a step closer with an additional $127,500 in funding announced by the NSW Government to move the project from a concept design to construction.

Parliamentary Secretary for the Central Coast, Adam Crouch, said the project has been a long time in the making.

“I have already secured $21,800 to begin the project in 2018, and more recently the team of volunteers received $130,000 by popular vote through the NSW Government’s My Community Project program,” Crouch said.

“Men’s Sheds on the Central Coast are the backbone of our community.

“Not only do they provide a social setting for local residents, they also enhance the mental health of
each participant.

“I want to congratulate Mike Mitchelmore, Ray Crawley and the entire team of supporters for their perseverance which has ensured this project becomes a reality.”

Coordinator of the project, Mike Mitchelmore, said he appreciated the support shown by the Copacabana community.

“This is wonderful news,” he said.

“We are very grateful to the NSW Government and local donors and sponsors for their generous support and look forward to establishing a facility that will benefit the entire community.”

The latest round of funding was one of the largest yet in a response to the recent drought, floods, bushfires and pandemic.

Since 2015, the NSW Government has funded more than 439 community projects worth $73M through the program.