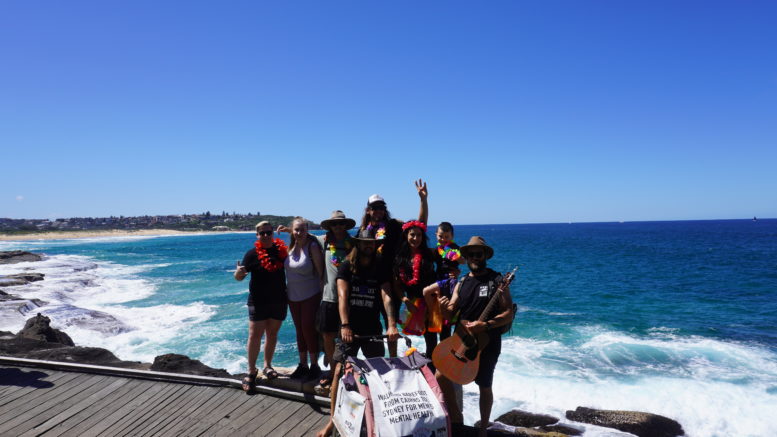 Local fundraisers Bryan Dorfling and Matthew Johnstone were so impressed by Anton Nootenboom, also known as the Barefoot Dutchman, that they joined him when he passed through the Central Coast last week.

Nootenboom was on his way to Manly where he completed is 2,600km journey on Sunday, October 17, walking barefoot from Cairns.

Nootenboom spent the past six months walking barefoot down the eastern coastline raising money and awareness for men’s mental health, and in the process, setting a new Guinness World Record.

Joining him for the walk in Budgewoi was Gorokan resident, Mathew Johnstone, and Live to Give Oz advocate, Bryan Dorfling.

Dorfling, who in 2020, swam from Bondi Beach to Budgewoi to raise money for Camp Breakaway, and walked from Budgewoi to Brisbane in 2019 to raise money and awareness for breast cancer, said the walk brought back memories of his swim and walk.

“When he (Nootenboom) was walking through Budgewoi, a friend messaged me asking if I had heard of this Barefoot Dutchman, so I had a quick look and thought this is amazing.

“I went to see him, he’s such a beautiful character, really jolly, really easy to chat with, and I’m going to walk with him to Sydney now.

“I’ve ditched my shoes in support of The Barefoot Dutchman.

“I like my shoes, I think they’re comfortable and soft and squishy, but this legend has done nearly 3,000kms in bare feet, so I thought I could do a hundred or so with him.

“The challenges I had pale in comparison to what he had, when I went on my walk, I had foot massages, and acupuncture and salt baths and he’s not doing any of that.

“He’s just doing the hard yards and getting it done, and it’s completely amazing.

“The Coasties have been amazing, I put out a little shout out on Live to Give Oz’s Facebook page which raised about $500 to cover his accommodation and food for the last few days.

“He’s been sleeping in a tent, so we thought the least we could do to make his coast trip comfortable.

“Everyone that we’re meeting on the way has been affected by mental health, and he’s really given a great message for a good cause.

“With all the lockdowns and all the fear and all the COVID restrictions, we need it now more than ever, so Anton getting out there and walking, it’s been able to really spread the message and do good for the community,” Dorfling said.

Johnstone said he joined the walk at Lake Munmorah after having a conversation with Nootenboom.

“It’s actually been pretty cool and just walking along, there were times that it got a bit tough, but we got the music out and had a good deep and meaningful chat, so we kind of formed a little bit of a Brady Bunch, and a really good friendship too.

“He’s such a humble bloke and it meant a lot to me, and also to support Anton getting to the finish,” Johnstone said.

Speaking at the end of his trek, Nootenboom said he was feeling overwhelmed.

“To make a statement like this, and to show everyone who is struggling right now to show them that they’re not alone,” Nootenboom said.

“It’s crazy that it’s been doing so much, especially these last few weeks as I saw it going up, and the fact that that money is going to help so many people.

“Everyone that has donated, thank you from the bottom of my heart.

“Thank you for helping me, helping everyone.

In 2019, Nootenboom became the first person to reach the Mount Everest Base Camp barefoot, raising money and awareness for the remote communities and wildlife of the Himalayas.

Grant runs a half marathon a day for charity