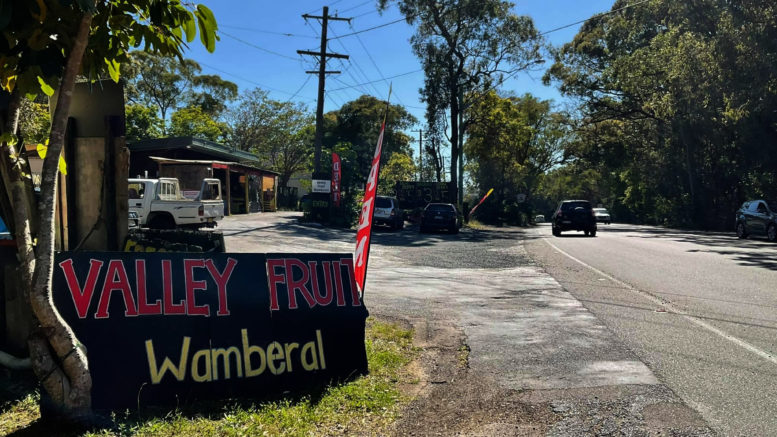 Despite fears that a major upgrade of the Tumbi Rd/Central Coast Hwy intersection at Wamberal could spell the demise of the nearby Valley Fruit, the fresh food outlet will remain and may gain a new carpark.

The revelation came as the NSW Government encouraged residents to have their say on the proposed roundabout upgrade before November 2.

Transport for NSW confirmed the iconic fruit shop would remain as it revealed latest plans for the work.

Valley Fruit Manager, Adrian Cremona, said details of the carpark were yet to be confirmed.

Cremona said news the shop would remain was welcome.

“It has been weighing on my mind for about a year,” he said.

“The carpark isn’t great because as it stands, when we unload the truck, we will block the carpark.

“There is a footpath that goes nowhere and no on-street parking, with very little parking allocated for the shop.”

Cremona said the plans were yet to be approved by the owner of the land which is leased by Valley Fruit and meetings with planners were ongoing.

Parliamentary Secretary for the Central Coast and Member for Terrigal, Adam Crouch, said Central Coast Hwy is used by about 26,500 motorists every day and the upgrade
required to prepare the road for future growth.

“In May this year we engaged WSP Australia Pty Ltd to develop the full design, as previous community feedback requested that the Tumbi Rd intersection be fast-tracked,” Crouch said.

Crouch said the concept design and Review of Environment Factors (REF) is available and open for comment.

“I am inviting the community to view the proposal, which involves replacing the roundabout with new traffic lights as well as widening the intersection to reduce queuing and improve traffic flow, and provide feedback directly to Transport for NSW,” he said.

“Upgrading this incredibly busy intersection will not be easy but it is an incredibly important project, and we are not going to shy away from the hard work.”

Transport for NSW will host an online information session so the community and stakeholders can learn more about the upgrade and ask the project team questions.

The date and time of the session will be announced on the project webpage and on social media.

Key elements of the proposed upgrade include: replacing the existing intersection roundabout with traffic lights; widening Central Coast Hwy north of the intersection to two lanes in each direction; providing two right turn lanes out of Tumbi Rd onto the highway southbound; lengthening the left turn lane into Tumbi Rd from the northbound lanes of the highway; providing a right turn lane into Tumbi Rd from the southbound lanes of the highway, new and upgraded footpaths and shared paths; providing a u-turn bay in front of Pacific Garden Hotel for southbound traffic; and relocating two existing bus stops to a common lo cation northbound on the highway north of the intersection.

“Previous submissions identified this is where people want us to get started and it’s important to get it right the first time; that’s why community consultation is so important,” Crouch said.

Feedback will be accepted until 5pm on Tuesday, November 2.

To view the concept design, REF and for more information on the upgrade, go to: nswroads.work/cch.