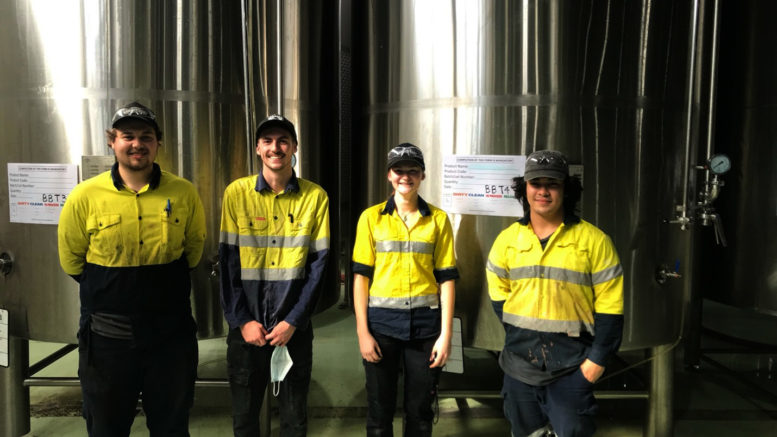 In less than a year after moving to Lisarow and setting up a brewery five times larger than its previous operation, Hawkesbury Brewing Co (HBC) has grown to a staff of more than 70 employees, four of them engineering apprentices.

Central Coast Head Brewer, Tim Best, and Head of Engineering, Mick Hookham, said it’s all about investing in the future and meaningfully contributing to the community.

“We’re on the Central Coast for the long haul and we’re committed to being a part of this community,” Hookham said.

Best said some of the skills of operating a brewery were unique and the company was excited to bring on apprentices and show them the ropes.

“We are teaching the apprentices all facets of brewery production.

“This includes fitting and welding, running the machines, helping with brewing and all the way to warehousing.

“We believe it’s critical they spend time in each area.

“At the end of the apprenticeship they will be qualified to work in our engineering departmen  and will be equipped with trade skills for life which will equally be transferrable to other industries.

Apprentice, Andrew Nemeth, said it was a great opportunity to skill up in a large, fast-growing industry.

“I’m learning how to run and maintain all of the different machines as well as weld stainless steel,” he said.

“So far the apprenticeship is challenging but a lot of fun and I’m excited to see where it takes me.

“I hope to expand my skill set and learn as much as I can to improve as a boilermaker, and continue to work at the Hawkesbury Brewing Co.”

“It’s not the type of job role that you would come across often,” she said.

“It is very rewarding knowing how much you are able to accomplish in such a short period of time.

“It’s a great to see the Hawkesbury beers we’re making going into more and more shops around the Coast and being part of something local.”

Best said the management at Hawkesbury Brewing Co felt lucky to be based on the Central Coast.

“The calibre of the people has been fantastic,” he said.

“Everyone is professional, works hard but still finds time for a laugh.

“There’s a real community aspect to our brewery now.

“We even have an olympian working amog us in Erin.”

The company will open a taphouse early in 2022 and continues to look at ways to expand and train its team.

“We’ve offered to pay for our brewery team to get their RSAs so in the future they can work in the taphouse and support the events we’re involved in,” Best said.

“It diversifies their skillsets and provides us with a multi-functional team; it’s a win-win.

“We have even trained a team to produce custom branded T-shirts which we use as part of our marketing program.

“We’re not the kind of business that sees people or roles as one dimensional.

“There’s a lot of opportunity for people to learn and grow in this company if they put the work in and show initiative.

“This seems to come naturally to people on the Central Coast, so its symbiotic in a way.”

The Hawkesbury Brewing Co is based at 900 Pacific Hwy Lisarow and produces a wide range of award-winning beers including alcoholic and non-alcoholic.

The company’s beers can be purchased in more than 100 locations on the Central Coast including Dan Murphy’s and BWS.