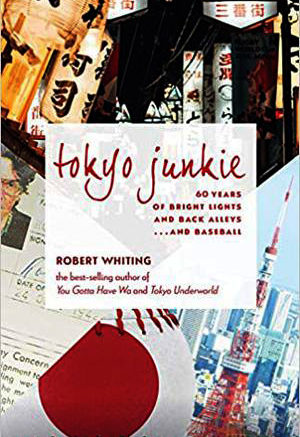 I have never been to Japan, but it is the one place I would love to go.

I find the culture fascinating and the food is my favourite.

When I found the book Tokyo Junkie, I focused on that part of the title and didn’t focus on the other part with the words…and Baseball.

I probably should have.

I have never heard of Robert Whiting before, but he has written three other books, two based on baseball, The Chrysanthemum and the Bat and You Gotta Have Wa and one book on the Japanese crime gangs, Tokyo Underworld.

You gotta have cojones to write a book like that.

Robert Whiting was introduced to Tokyo in 1962 when he was a 19-year-old GI from a small town in California.

Japan at that time was “still struggling to recover from the damage of defeat in World War 2.”

But the city was hosting the 1964 Olympics and construction was going full tilt.

Whiting says, “I had arrived at what someone would later describe the biggest construction site in the world.”

The Olympics was a huge success and Life magazine called it “the Greatest Olympic Games ever.”

Whiting’s military service was coming to an end and he had decisions to make but he also felt a shift in the mood of the city.

There was a resentment towards foreigners, “too many gaijin”.

But this did not deter Whiting who decided to stay.

He enrolled at Sophia University and lived small Japanese unit without heat or hot water.

He knew Tokyo was going to be “a force to be reckoned with”.

He had a job as an English tutor, worked for Encyclopedia Britannica (for you youngsters they are books people used to get information, before there was Google) before becoming an author.

He moved to New York for a while but found it “Less Breakfast at Tiffany’s and more Midnight Cowboy.”

He wrote about Japanese baseball and met many of the American players that went to Japan to play.

He met his wife who worked for the UN and had to travel around the world but he always ended up back in Tokyo.

On his seventy-seventh birthday he reflected on the changes he had seen in Tokyo in the past fifty years and “that there is very little left in Tokyo older than I am, given how this city keeps on renewing itself.”

This book does not glorify Tokyo at all.

Besides traffic, bureaucracy, gender-equality, “questions about press freedom, rampant cronyism in politics, and a government that is all too often enmeshed in scandal.”

Although I wasn’t keen on all the baseball references, as I am not a fan, I did find the politics of it interesting.

In Japan, politics and sport surely do mix it seems.

The descriptions of the Tokyo underworld were also fascinating – this guy has met some interesting characters.

The story chronicles both Whitings personal changes since arriving as a 19 year old in concert with the broader transformation that the city of Tokyo since the early 1960s.

He recounts the preparation of two Olympic games with great insights.

I have to say it was difficult to reconcile my idea of what Tokyo is today to the one Whiting moved to in the 1960’s, which was “rat-infested … 40 percent of Japanese had tapeworms … no ambulances, and infant mortality was twenty times what it is today.”

Well worth the read.