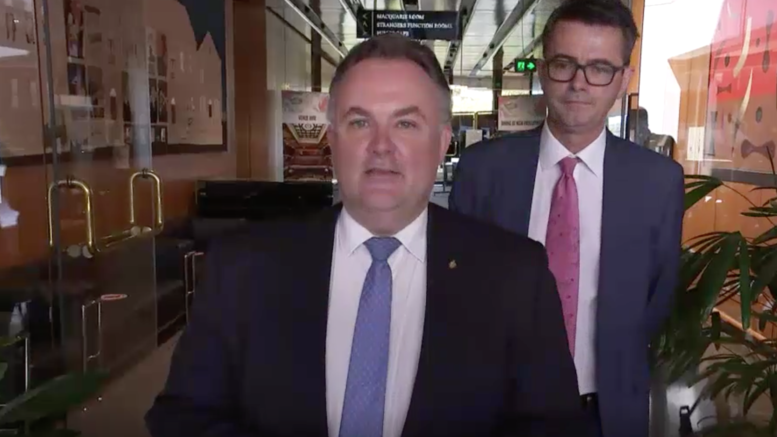 Dominic Perrottet was sworn in as NSW Premier at 2pm on Tuesday, October 5, following the resignation of Gladys Berejiklian last week as she is being investigated by the Independent Commission Against Corruption (ICAC) – [Video interview included].

CCN asked Parliamentary Secretary for Central Coast, Adam Crouch, what the change in leadership would mean for the Central Coast, however, a response was unavailable before publication.

In his role as Government Whip, Crouch also officially announce the outcome of the leadership ballot which resulted in the installation of Perrottet as party leader and NSW Premier.

Crouch has worked closely with former Premier Gladys Berejiklian and over the long weekend posted a photograph of himself with Berejiklian on social media and told followers he would be pleased to pass on their messages.

Central Coast Labor MPs are calling on the new Premier and his leadership team to quickly affirm their commitment to supporting the Central Coast.

“The new Premier must give the Coast, and NSW, certainty as we move towards the 70 per cent (vaccination of those aged 16 and over) milestone and staged reopening of the state,” they said.

“It’s time for the NSW Government to refocus on the people of NSW and end the chaos of the past few days.

“At one of the most critical times in the state’s history, during a health pandemic and economic uncertainty, we have seen the Premier, the Deputy Premier and a Senior Minister step down, causing massive instability at a time when cool heads and a steady hand is needed.”

At a Tuesday press conference after Perrottet was announced Premier, he said (the Government) wanted NSW to bounce back stronger, safer and more successful than ever before.

Stuart Ayres, the Minister for Jobs, Investment, Tourism and Western Sydney, was elected by the Liberal Party as Deputy Leader.

The new Treasurer will be Matt Kean, the Minister for Energy and Environment.

“We will keep our team in place … and our team will bring the energy, the experience, to get our state safely open again and then take it to the next level.

“Right now, the focus of our Government is on the people of NSW.

“We are at an incredibly important juncture, on Monday (October 11) the state opens up and we want to get people back to work and businesses opening again, and that is the sole focus of our government today,” Perrottet said.

“Much of the Government’s direction was already determined by Dominic Perrottet in his role as Treasurer,” he said.

“The new Premier already has a cloud over his leadership following the iCare worker’s compensation controversy and the questionable status of Transport Asset Holding Entity (TAHE) highlighted by the NSW Auditor General.

“The Government still has two other MPs under investigation and will rely on the vote of independent members to pass legislation at least until the future of those MPs is determined and by-elections are held for the resigning members,” Harris said.

The Entrance MP, David Mehan, labelled Perrottet as “the most conservative the state has seen” which, he said, was the last thing we need on the Central Coast.

“He has already committed to further privatisation (Westconnex) and creation of slush funds (Westinvest) which will go to propping up Liberal/National Party seats rather than serving the people of NSW,” Mehan said.

Swansea MP Yasmin Catley said: “This is not a fresh start for this ageing Liberal Government but more of the same.

Total COVID cases on the Coast rise to 25

6 Comments on "A future under Premier Perrottet raises questions"