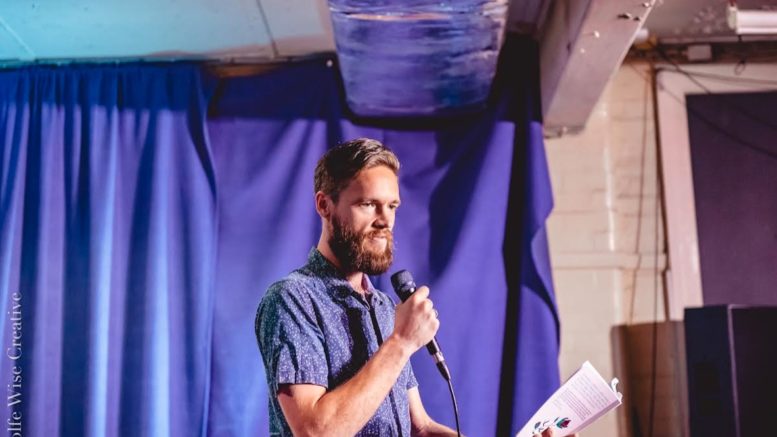 It’s not often you come across a poet who is moving and shaking mountains in their creative field.
Will Small; Poet, Podcaster, Speaker and Writer has been on the central coast for a number of years with his family, doing what he loves and making a difference.

Will grew up in Canberra and was a lover of books and language from as early as he can remember.
Tupac was his entry point in year 8 into his appreciation of his rap.
As he grew up, he got exposed to spoken word poetry and began presenting his raps without any music.

I mentioned to him that in my mind poetry was different to lyrics because it’s experienced against the contrast of silence, and in some ways could be more powerful.

“Yeah in a rap setting everything is about being on beat, but in a spoken word setting, you can shock people by taking a big long pause, or by completely changing your pacing.”

“Rap gives a framework that spoken word can break free from”

Will has done many pieces to camera spoken word presentations that are empowering and cutting edge. One of his older pieces called YOLO, touches on age being a restriction for many people in the sense that they shouldn’t get married or settle down too soon, or take on careers that they don’t yet understand. Now ten years later Will still agrees with some sentiments of this, but wrote a piece back to his younger self, saying although its true there is no rush.

“Whilst I see we can up our expectations of younger people, there’s also no rush”

This steered the conversation towards art itself and whether you need a rich long life filled with traumas to produce good art, or whether you can just produce masterpieces from a young age.

“Even if you’re making art at x age, you still have to keep showing up. Art is about continuing to show up, to continuing to refine your practice”

“Like my 5 year old has said some amazing lines of poetry, he looks the aeroplane and he says its  tearing through the sky”

Where do you think art comes from, I asked?

“I use the word conversation a lot. There’s three primary colours and we just rearrange them, there’s 12 notes, we are just rearranging them. I’m not using new words, I’m just showing them in a new way.”

“When I was younger I was a lot more self righteous telling people how it is, now ive got a lot more questions, so yeah it comes from listening and observing and definitely spiritual element”

“My inner critic becomes stronger through certain seasons. When I was in high-school, I was very big on freestyle rap and with freestyle you don’t have that voice in your head that says that idea is not worth sharing, but as time goes on, you have that thing that makes you feel like you have to be as good as the thing you were in the past, you’re trying to fulfil a persona that people expect of you rather than just exploring creativity. That’s my biggest challenge, how to explore the wonder again”

Wills has done a number of podcasts and has a few on the go at any one time.

Poetic beings, one of them, involved trying to capture people’s stories and writing poems from them, which he put into a book, called poetic beings.

“People are a gold mine and your digging for gold, having that listening ear, knowing there’s a poem here, the way the body lights up, I begin to notice the poem in the person, so I’m discovering it rather than writing it”

Can you tell us why poetry isn’t dead, I asked.

“The reason why people do think it’s dead, is a lot of us in school only know about dead white guys, such as Shakespear, banjo Paterson, Robert frost, if the only poets you can name died hundreds of years ago, well it just feels like a part of history, even if their work is great.
If I asked you which musicians you like or actors, you name people who are living, even though you could name people who have died, it’s just weird how we learn through poetry through people who are dead. So what changed that for me is hip-hop, so I realised poetry not dead, it’s just changed where it’s hanging out”

I asked if he thought poetry was snubbed due to it being perceived as elitist, political or having too much pretence.

“For sure, it’s definitely perceived as an academic art form, it lends itself to critiquing and having lofty conversations about a poem, rather than just experiencing it.
Why I love spoken word is your not asking this, your just asking whether you felt something”

“The guy who started slam poetry, mark smith in Chicago, said even the poet who’s delivering the poem is falling asleep, it is dry, let’s make it apart of the common people”

“That’s how it should be, anyone can play and anyone can have an opinion”

From here I swung across to some of Will’s blog posts, one that really struck out to me, was about being a young father.

“A huge part of my parenting journey, is that I always imagined I’d be a dad of daughters, when my first son was born, I went on this big journey as to why I felt uncomfortable with that, and it stemmed back to not feeling like I had enough masculinity in me to pass on, so managing expectations is very interesting. But being present, putting your creative brain on hold to just be there with them, is the most important”