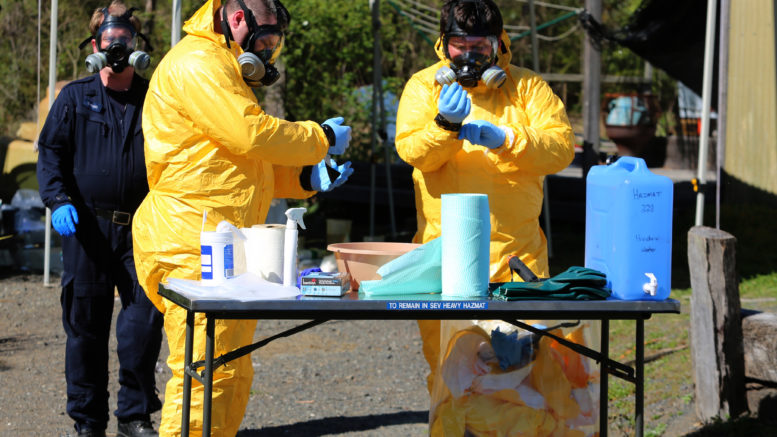 Two men appeared in Wyong Local Court on September 8 following the discovery of a meth lab at Kulnura the day before.

The arrests followed an incident on Burns Rd, Ourimbah, just after 5pm on September 7.

Police will allege a vehicle rammed two police vehicles, heavily damaging one and causing minor injuries to a male Senior Constable, before the two occupants fled on foot.

Detectives, assisted by local police and the Dog Squad, arrested two men – aged 35 and 48 – nearby a short time later, before they were taken to Wyong Police Station.

A search warrant was executed at an Ourimbah home, where police seized drug paraphernalia, $220,000 cash, an electronic stun device, and a ballistic vest.

As part of ongoing inquiries, a crime scene warrant was subsequently executed at a rural property in Kulnura about 9pm that night where officers seized more than 10kg of methylamphetamine, a large quantity of methylamphetamine oil, more than 20kg of precursor chemicals used in the manufacture of prohibited drugs, and equipment consistent with the large-scale manufacture of prohibited drugs from a shed on the property.

All items and substances seized during the operation will undergo further forensic examination.

Both men were charged with various offences and refused bail to appear at Wyong Local Court on September 8, where they were formally refused bail to reappear at the same court on Tuesday, November 2.