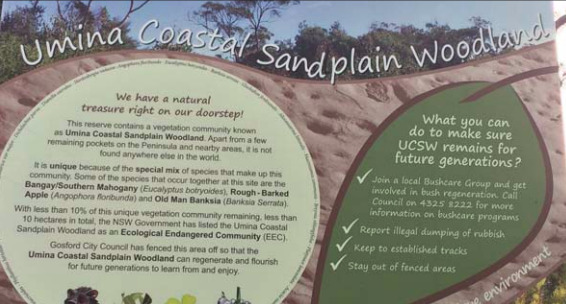 Money recommended for release by the Protection of the Environment Trust (POET) committee for the management and rehabilitation of the Umina Coastal Sandplain Woodland (UCSW) will focus on three sites on the Peninsula.

According to a statement from Central Coast Council, “The $41,730 recommended for release by the POET Committee for the 2021-22 financial year will allow restoration and rehabilitation works to be undertaken on the three largest remnants of UCSW at Hillview Street Bush Reserve/Burrawang Reserve, Umina Oval and McEvoy Oval.

“The funds held by the POET for the management and rehabilitation of the UCSW were deposited into the Trust as a condition of a development consent.

“The funds held by the Trust are to be spent in consultation with the NSW Government and in accordance with the general management recommendations listed in the UCSW
Endangered Ecological Community Restoration and Rehabilitation Management Plan prepared by the former Department of Environment and Climate Change.”

According to the Council statement the works to be funded will include access formalisation and control where required to reduce the impact of uncontrolled access across the three sites.

The Council intends to spend funds on community awareness and education signage.

It will undertake a review of drainage reserve management at Hillview Street Bush Reserve.

“The works funded from the POET will complement the UCSW management and restoration actions previously undertaken by Council,” the statement said.

Council Administrator, Rik Hart, accepted the recommendation from the POET Committee and moved to release the money at the September 14 Council meeting, as previously reported.

At that time Hart said he had received a request from the public for the release of more information about how the money would be spent and that he had passed that request on to staff.

The Umina Coastal Sandplain Woodland is an Endangered Ecological Community which is unique to the Central Coast region and especially to the Woy Woy Peninsula.