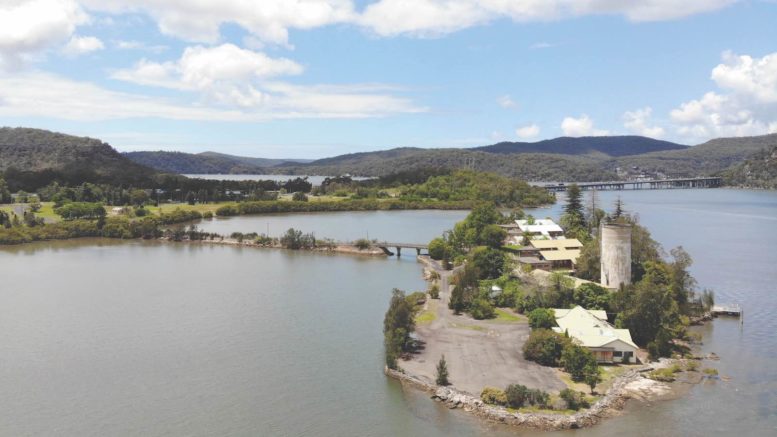 An areal view of Peat Island in the Hawkesbury

Residents have until December 20 to make a submission on the recently released Planning Proposal for Mooney Mooney and Peat Island.

Touted by the State Government as a proposal to breathe new life into old assets, open Peat Island to the public and revitalise Mooney Mooney, there are members of the community who are not so sure about a rezoning which would see almost 300 residences built in the area.

First submitted to the then Gosford Council in August 2014, the planning proposal was referred to the Department of Industry and the Environment (DPIE) for Gateway determination.

In September 2015, the DPIE requested a revised proposal to address various issues.

This revised proposal was submitted to Council in November 2016 and a Gateway determination was issued with conditions in August 2017, extending the timeframe for completion of an LEP (Local Environment Plan) to August 2021.

Parliamentary Secretary for the Central Coast, Adam Crouch, said the proposal aims to unlock publicly-owned land in the area to capitalise on the stunning Hawkesbury River setting.

Retention of nine unlisted historical buildings on the island, and four on the mainland, to be restored and used for new community and commercial opportunities; new retail and café or restaurant opportunities; approximately 9.65ha of open space, including opportunities for walking and cycling tracks, parklands and recreational facilities; retention of the chapel and surrounding land for community use; and 10.4ha of bushland dedicated as a conservation area.

“The NSW Government has been consulting widely, culminating in this rezoning proposal that strikes a balance between future land uses and achieving the best social and economic outcomes for the Mooney Mooney community,” Crouch said.

“It also opens up 2km of river water frontage with the potential for aquaculture.

“It is an amazing balance of new development and preserving the natural beauty of the area.

“It’s about ripping down fences and opening up a parcel of land which has been closed to the public for almost a century.”

With housing affordability a major issue on the Central Coast, Crouch said the planned residences, which would include detached, attached housing and low-rise residential flat buildings ranging in height from one to three storeys, would provide another avenue for people to get into their first home.

Resident John Andrews, who is a member of the Mooney Mooney-Cheero Progress Association, said while opening up the island for tourism was a good idea, many would be shocked by the proposal to build 267 residences in the area, particularly some on land west of the M1.

“The problems with homes which are two and three storeys high is that they will not fit in with the historic buildings in the community, which are primarily cottages.

“There hasn’t been a land release on the Hawkesbury for almost 100 years and it might come as a bit of a shock to the community.

“It is a good idea to publicise and encourage visitors to this part of the world, which is not as well-known as it should be, and zoning the island for tourism is a good thing, paving the way for everything from hotels to backpackers.

“But tourism would be a slow build, as opposed to a fast build of hundreds of residences.

“The land between the M1 and the island should also be zoned tourism and nor for private dwellings.”

Minister for Water, Property and Housing, Melinda Pavey, said any future uses of the land would recognise and protect the site’s significant Aboriginal and European heritage.

Pavey said the Government would continue to work with the Peat Island/Mooney Mooney Community Reference Group on the future of the area’s community facilities.

The rezoning proposal will also remain open to submissions from the public until Monday, December 20.