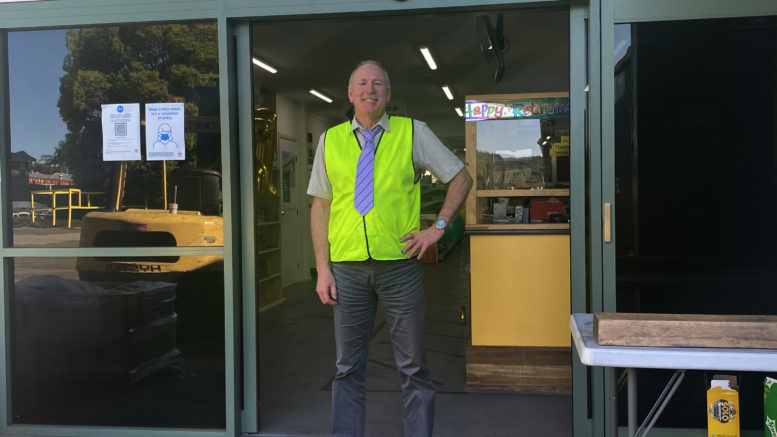 Keith Sparrow on his last day at Walker Bros

For the first time in 70 years, there is no longer a member of the Sparrow family on the payroll at Walker Bros Timber and Building Supplies at North Gosford, following the retirement on August 31 of Keith Sparrow after a 51 year career with the company.

Sparrow was the third member of his family to work for the business, with he, his father Alan and brother John chalking up 108 years of combined service between them.

Alan Sparrow joined Walker Bros in 1950 and worked as a truck driver until his retirement in 1982.

John Sparrow worked in the company office for 25 years, also filling the job of Yard Manager for a time before leaving to become a farmer.

Keith Sparrow followed in their footsteps when he joined the company as a 17-year-old and retired 51 years to the day later.

“I’ve had lots of calls to wish me well, but it feels a bit bizarre to be leaving.

“When you’ve been doing (the job) for 51 years, you’re almost on auto pilot.

“I was 18 months into a plumbing apprenticeship when my Dad came home one day and said then General Manager Peter Walker had asked if I’d be interested in joining the business’s office staff.

“A few days late I started, taking orders in the office.”

Sparrow has held a variety of positions with the company, most recently Operations Manager.

“I took on different roles as I got more experience including stock control, looking after staff and stock inventory, which was a big job as we have a rapid turnover,” he said.

“The workload evolved over the years.

“I’ve even done small stints helping in the yard, I’ve filled in for the Yard manager at times and controlled the loading of the trucks and getting orders ready for delivery but mostly mine was an office job.”

With current COVID-19 restrictions making it difficult for Sparrow to plan the next phase of his life, he and wife Jill are hoping to join the legions of Grey Nomads exploring Australia.

“There are lots of parts of the country we haven’t seen, and we hope to take to the road in the next few years,” he said.

“We also enjoy sailing, and we have pushbikes and kayaks – we like to keep active.”

“51 years with one business is something you don’t often see,” he said.

“Keith’s achievement is compounded by the fact that he, his father and brother have given more than 100 years service to the company.

“We are grateful and proud to have had them as part of the business.

“Keith has known and worked with three generations of the Walker family.”

Founded in 1933, Walker Bros has a rich business history on the Central Coast.

These days Walker family members sit on the Board of Directors, with day to day running of the company in the hands of McKiernan and finance officer Samantha Armour.

Be the first to comment on "The last Sparrow departs"