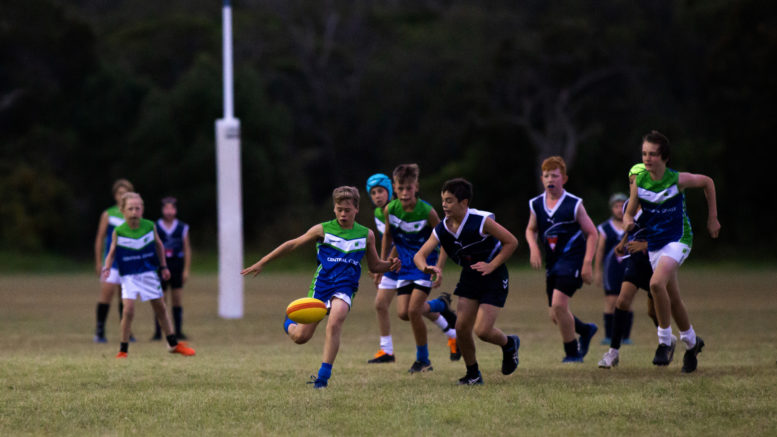 The Central Coast Academy of Sport squad 2020/21 in action

A new partnership between the QBE Sydney Swans Academy and the NSW Regional Academies of Sport could open a pathway for Central Coast players to progress to the highest level of AFL competition.

The Central Coast Academy of Sport will be one of four academies to compete in a regional talent search carnival in 2022.

With a commitment to identifying junior talent across regional NSW, the new event will be called the Academy Cup and aims to have the best footballers from each of the identified Sydney Swans catchment areas play against each other in what will be a showcase of regional talent.

Head of the QBE Sydney Swans Academy, Chris Smith, said selectors will be present with the goal of identifying young athletes to join the Swans Academy.

“It is important to create an environment where the best players in the region get to compete against the best from other regions,” he said.

Originally planned to occur in late 2021, the date of the 2022 carnival is yet to be confirmed.

As restrictions ease and sporting calendars become clear a date is expected to be set next Autumn.

The Swans Academy plans to use the event each year as a chance to identify possible inductees into their program prior to naming their main top-end squads.

Competition will see both genders represented and comprise small talent squads in the Under 14 and 16 age groups.

In a lead up to the Academy Cup, an AFL program will operate over the summer months to ensure squads are well prepared for the competition.

Central Coast Academy of Sport Managing Director, Ian Robilliard, said the sole purpose of the carnival is to provide a platform for regional athletes to be identified and then hopefully developed within the talented athlete pathway provided by the Sydney Swans.

“We know the biggest obstacle in the progression of regional NSW athletes is opportunity to be seen, and for young footballers in our region we believe opportunities such as this talent search carnival will certainly help overcome this,” he said.

It is the responsibility of each of the regional academies to select its squads working with local associations and coaches.

Applications are open for the Central Coast AFL Talent Identification Program and can be found at www.thinksport.com.au/programs/AFL-2 Academy.