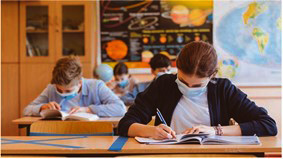 A staggered return of students to face-to-face learning will begin on October 25. Online resources such as this will build on home schooling.

Local schools will see a staggered return to face-to-face learning from October according to a newly released plan from the NSW Government.

The plan, which was released on August 27, also noted that HSC exams will be delayed until November and vaccinations for school staff will become mandatory.

The Department of Education said the plan will help bring students back in a COVID-safe way while stay at home orders are still in place, with schools to have NSW Health approved COVID-safe plans on site.

On October 25, Kindergarten and Year One students will return to the classroom, before being joined by Year Two, Six and 11 students from November 1, and the rest of the year cohorts from November 8.

From October 25, Year 12 students will have full time access to school campuses and their teachers.

The NSW Government said if stay at home orders are lifted in an LGA before October 25, all students living or learning in that area will return to face-to-face learning before their indicated date.

However, if cases in LGAs increase significantly, the government has said learning from home will resume for that LGA until case numbers drop.

Under the new plan, HSC exams will be delayed until November 9 with a revised timetable and guidelines for a COVID-safe HSC are expected to be released by NESA in early September.

Spokesperson of the Central Coast Council of P&C’s, Sharryn Brownlee, said the decision to launch a staged approach has worried many parents.

“I spoke to representatives from district P&C’s on Monday about this – the changing of dates around the opening of schools has caused stress and confusion for students and their families,” Brownlee said.

“For families with two or more school-aged children, it is very problematic as staggered returns will not alleviate the stress for the parents nor the children left at home, it will be hard to explain, and will not establish any semblance of normality for those returning.

“Having the HSC students come back is one issue but taking back different grades at different stages makes no sense at all to parents … it’s overwhelming for them, no sense can be made at all around the staged return, they feel it will be more worrying for children and far from the norm.

“It should be all the students coming back in a COVID-safe environment.

“The Department of Education’s levels 3, 3 plus, 4 and 4 plus do not reassure parents of their children’s safety.

“Parents are concerned, and some want the option of continuing home schooling.

“Especially if all staff and students are not vaccinated.

“The fear of COVID spreading further is very real.

“These decisions, and the consultation process that has occurred has been a bit opaque and some of those decisions are affecting parents and children’s mental wellbeing.”

And Brownlee said it wasn’t just the students that parents were concerned about; it was teachers too.

“It’s going to be highly unlikely that all teachers will be able to be fully vaccinated in time – some are still waiting for their first vaccine appointments in November,” she said.

“There is simply not enough Pfizer vaccines to cover the students and teachers who need that vaccine.

“We care enormously about students and teachers, and we know there has to be sensible decisions made but when you look at these decisions … you can’t see the rationale.

“Unless there is a substantial increase in supply, it is just going to be pitting suburb against suburb, teachers against students to see who gets vaccinated first.

“We know some staff are unable to get a vaccination appointment – it’s very frustrating for them because they can’t access it and it is now mandatory before they can be on a school site.”

“It’s very difficult and quite hypocritical to continue to call for people to get vaccinated when they actually can’t because they cannot access the vaccine right now.”

Vaccinations for all school staff across all sectors will be mandatory from November 8.

NSW Health said they will be providing priority vaccinations at Sydney’s Qudos Bank Arena for staff from September 6, however for teachers up on the Central Coast, a local solution has yet to be announced.

The Department said early childcare staff will be able to participate in the priority vaccinations from September.