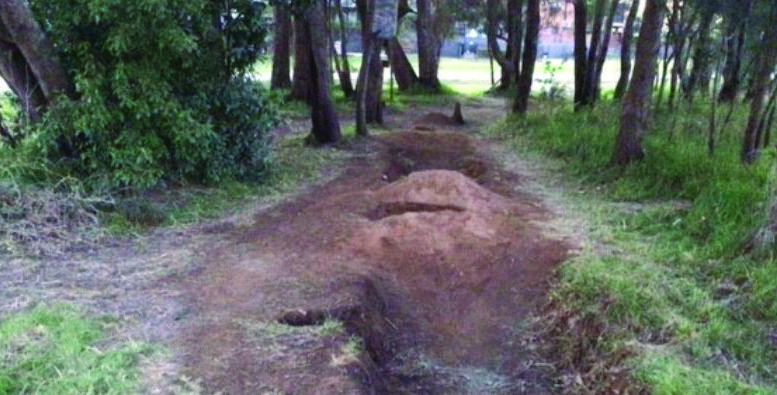 Every report to Council is assessed by staff for its risk to the surrounding environment, threatened species, any heritage values as well as the risk to the greater public before determining the next steps.

Council Director Environment and Planning, Scott Cox, said Council had received an increased number of reports from the community about unauthorised mountain bike and BMX tracks and structures being built right across the Coast.

“Unauthorised bike tracks and jumps are constructed without any approval or assessment of impacts to environment, heritage or other reserve users,” Cox said.

“They have the potential to negatively impact trees, native vegetation and the habitat of our local native animals; provide greater access for foxes, cats and dogs into bushland which makes native fauna more vulnerable to predation’ alter natural drainage patterns and cause soil erosion or water pollution; damage sites of Aboriginal or European heritage value and attract littering and illegal dumping.

“As the risks are higher in our natural reserves, we have increased proactive patrols by our community safety officers to monitor community compliance with the Local Government Act – the act of knowingly causing these impacts is an offence and penalties may apply to those people found to be responsible.”

“We are taking a pragmatic approach to the informal BMX jump tracks being built in open space areas,” he said.

“This is a very difficult time for many in our community and the current lockdown restrictions in place mean many children are unable to attend school and all formal sport and recreation has ceased.

“If the informal BMX tracks are not causing environmental harm and the risk to the greater public is minimal then we are currently not removing them from open space areas.

“At this moment there is a greater mental health benefit for our children in leaving them as is.

“We will continue to monitor reported sites and if the level of risk increases, we will take appropriate action at that time,” Sherar said.

1 Comment on "Reserves patrolled for illegal tracks and jumps"