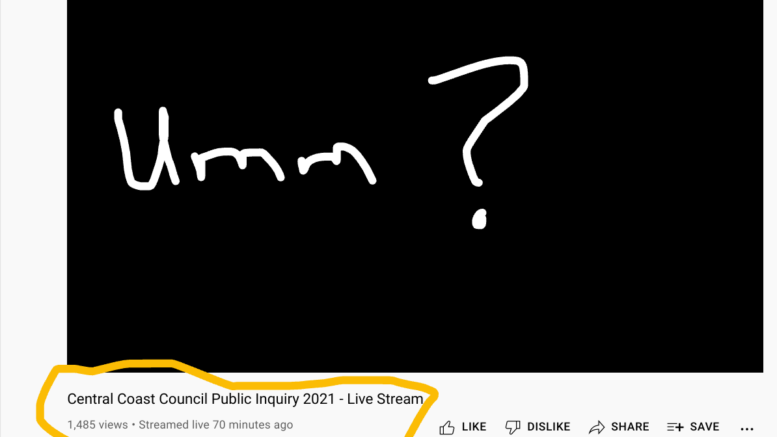 A screenshot of the live stream

The long awaited first day of the Public Inquiry into the Central Coast Council was a bungled exercise in using technology.

In normal circumstances Commissioner Roslyn McCulloch would take up residence in the Council Chamber at Wyong and question those summonsed to attend before a live audience.

COVID-19 put paid to that so the Office of Local Government decided to hold the inquiry using
TEAMS – a Microsoft version of Zoom – and broadcast it live on their youtube channel.

Problem was they could not get their technological act together, at all.

The inquiry never got off the ground on day one, with State Labor MP for The Entrance David Mehan calling it a sham.

“The first day of the Inquiry is just like the State Government’s Council amalgamation policy – a complete failure,” he said.

Local residents shared with CCN letters they fired off to the Local Government Minister Shelley Hancock.

One said their kindergarten kids understood how to use the technology while another offered to send in his 11-year-old son to help.

Gorokan resident Craig Barnsley said that constituents were alienated and removed from any democratic process.

“Your department must be seriously underfunded in digital delivery and technology services to have these issues continue two years into a pandemic,” he said.

“Kindergarten children are expected and are actually quite capable of using Zoom and TEAMS to complete their learning.

David Thepsiri said his 11-year-old son ran livestreams regularly and could offer to help because such an important event should be visible to the public.

Green Point resident Joy Cooper said she had planned her week around being able to watch the live stream.

“To say I’m shocked and very disappointed is an understatement,” she said.

“I have spent so much of my time waiting and trying to know what is happening with the Public Inquiry today.

“There has been nothing public about this inquiry to date, just a series of bungles, miscalculations, screw ups and mismanagement.

“I truly hope this poor start to what I, and many other Central Coast residents, see as an extremely important inquiry, isn’t an indication of how it will continue, or an indication of the interest the government has in getting to the truth of what happened.”

It was a comedy of errors from the start.

The link to the youtube channel was missing from the Local Government page; and it didn’t work anyway once it became public.

The screen was black for most of the day with a feedback loop of a man’s voice talking about the technical issues.

A random bit of another conversation about kids with ADHD learning to read was part of the loop that went for hours.

Later, there was vision of the suspended mayor Lisa Matthews speaking and answering questions from another person, presumably the Commissioner Roslyn McCullough.

There were a few moments of vision and speech that synced but not for long and then the whole thing disappeared.

Questions from CCN to both the Office of Local Government and the Inquiry itself were answered apologetically from staff citing technical difficulties and asking for patience.

Questions still to be answered: will the Commissioner be able to get the technology working tomorrow?

Will she start the whole thing again from the beginning?

All this and more is still to be revealed.

2 Comments on "Public Inquiry Day One a debacle"