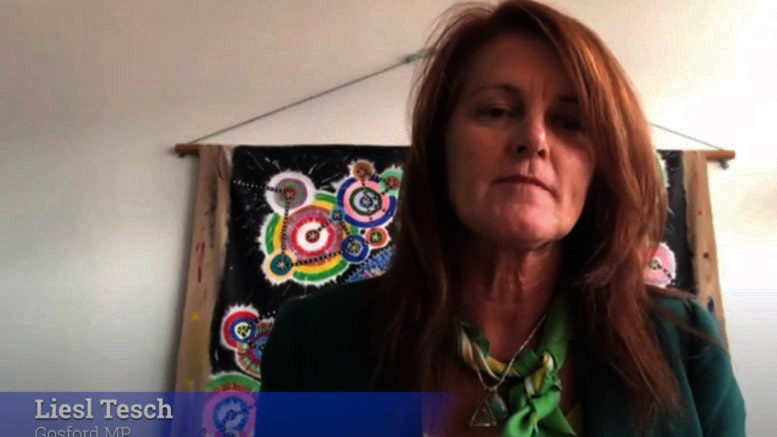 State MP Liesl Tesch has accused NSW Premier Gladys Berejiklian of “abandoning” the people of the Central Coast and the rest of the state with her recent decision to no longer front an 11am COVID update each day.

Berejiklian announced on September 10 that daily health updates would still be provided by NSW Health via video link but that she and the Health Minister would only appear “intermittently” before the cameras on a “needs basis”.

“I will turn up when I need to but to expect the leader of the government indefinitely to do this every day means that I am not doing my job properly,” she said.

Tesch said the move was a clear abandonment of the Premier’s duties and continued a concerning trend of poor transparency by the Government.

“The people of NSW (have been) turning to and tuning into the Premier day in and day out to get their daily news on the worsening pandemic,” she said.

“For the people of NSW the Premier’s updates are almost a lifeline, providing certainty of information and a little bit of hope in the darkest of times.

“When we look to other states, not one has abandoned their press conferences despite having significantly lower cases.

“I distinctly remember last year as Victoria continued through their lockdowns for months on end the Premier of Victoria did not abandon his duties; instead he got up every day, fronted the media and gave full and frank advice.”

Tesch said with the Central Coast recording ever-growing numbers of COVID cases, now was not the time to pull the press conferences.

“Coasties are now experiencing the worst of the current outbreak and with recent press conferences flagging the Central Coast as an area of concern, it provides more unease for our community when our source of information is stopped,” she said.

“Now more than ever we need our questions answered, our information relayed efficiently and our Government to be responsible.

“With (the Premier) still refusing to allow NSW Parliament to sit, despite it clearly being a critical job in the middle of a pandemic, this recent move to cancel daily press conferences means she will get to escape accountability altogether.”

Tesch said there were also concerns that as case numbers rise exposure sites are not being recorded quickly enough.

Despite saying September 12 would mark the last of the daily COVID updates, Berejiklian fronted the cameras for one last time on September 13, as Opposition Leader Chris Minns held his own press conference.

Minns said a continuation of daily press conferences by the Premier was “crucial” as the peak of the pandemic approached.

“What we need at the moment is consistency from the NSW Government; we need clear communication and we need accountability from the Premier,” he said.

“Governments can’t pick and choose when they’re going to be accountable both to the media and to the NSW public.

“Good governments should relish scrutiny; they shouldn’t run away from it.”

Minns reinforced the Premier’s plea to all residents to get vaccinated and follow restrictions.

He said even if the Premier didn’t personally attend a daily press conference, “somebody needs to front up from the NSW Government and explain what is going on at the peak of this pandemic”.

1 Comment on "Premier must continue to face people says Tesch"