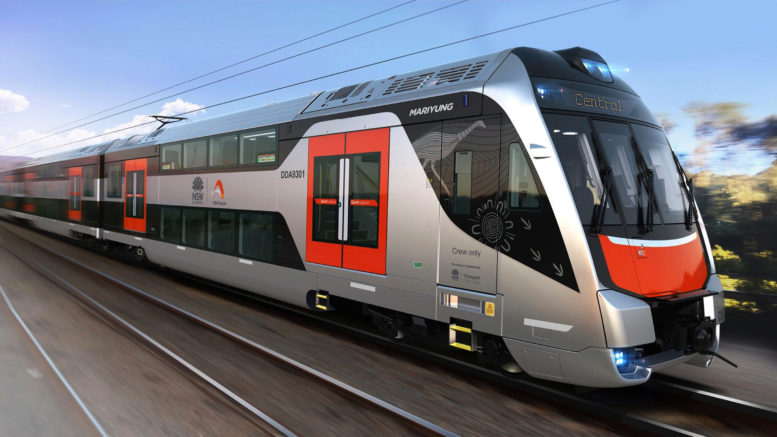 New intercity trains, called the Mariyung Fleet, have received the final tick of approval to start carrying rail travellers between Sydney and the Central Coast and Newcastle along with the Blue Mountains and the South Coast.

Minister for Transport, Andrew Constance, said the Office of the National Rail Safety Regulator had endorsed the safety of the trains.

He said they were equipped with advanced technology not available on existing intercity trains, such as sensitive edges on doors so they would automatically reopen if an object got trapped, plus the train couldn’t physically move until all doors were closed.

There will be wider, more spacious two-by-two seating for extra room and comfort with arm rests, tray tables and high seat backs.

The trains will have charging ports for mobile devices, dedicated spaces for luggage, prams and bicycles as well as improved accessibility, including dedicated space for wheelchairs.

“The 55 10-car Mariyung fleet will replace the ageing V-Sets and will have two staff on every train – a driver and guard – who instead of being confined in a cabin will be able to move through the carriage to support passengers,” Toole said.

Transport for NSW and NSW TrainLink are working through the final arrangements to bring the Mariyung Fleet into service as soon as possible.

The Mariyung name for the new rail fleet is a Darug word for emu, in acknowledgement of Aboriginal culture, and the artwork for the exterior of the trains has been designed by Darug woman, Leanne Mulgo Watson, from the Upper Hawkesbury area.

These new trains will run through many Aboriginal Countries such as Darug and also have connections in Wiradjuri Country, Awabakal Country and Dharawal Country.

There are currently 16 trains testing on the network, eight of which are ready to progressively enter customer service.