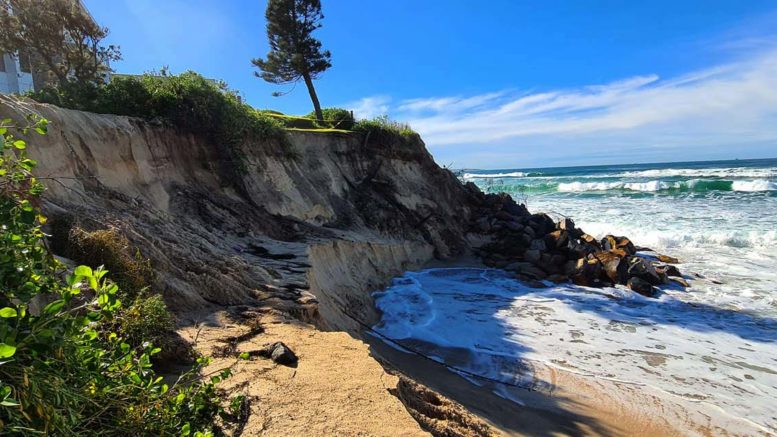 Dune erosion at the end of rock wall

The Entrance MP, David Mehan, has backed calls by residents of Hutton Rd for more to be done to protect The Entrance North from coastal erosion.

North Entrance Beach was seriously eroded during storms in May and June 2020 which resulted in the construction of emergency works on the beach to protect homes located there.

The emergency protection works comprised a rock wall at the toe of the erosion scarp with geotextile fabric placed on the scarp to
resist further erosion.

Sand was then placed to cover the work and reinstate the dune.

Recent storms have exposed the rock wall and further erosion has occurred at the south end of the wall which has seen the dune eroded another 10m to 15m.

Residents believe the rock groyne constructed on The Entrance beach in 2017 might be contributing to the erosion problem and want to see the rock wall extended.

In response to a question from Mehan in State Parliament, Transport for NSW said a study into the groyne was being undertaken.

Mehan called for the study to be made public and to squarely address the concerns of North Entrance residents.

He has also called for the State Government and Central Coast Council to work together to improve the erosion protection works at North Entrance.

Council has been working to address erosion on that beach for a long time and has, over time, used sand nourishment techniques as well as sand scraping to speed up the natural process of recovery along the beach.

In July, Mehan asked Council when dredging at The Entrance Channel would recommence, because that’s where the sand comes from to re-stock the beach at North Entrance.

Council has since received $495,000 funding from the NSW Government and it is anticipated that dredging works will begin in mid-2022.

Council has been investigating ways to provide a suitable “end treatment” to the rock wall at North Entrance, and to wrap back towards the reserve to avoid ongoing erosion.

“When works were undertaken during the 2020 coastal erosion event, this design element was not possible without excavating a significant portion of the dune, however, natural scour and erosion may now present an opportunity for Council to undertake the necessary maintenance,” a Council spokesperson said.

Council staff are now working to ensure all relevant site constraints and planning considerations are appropriately addressed, and following those investigations, Council will announce plans for North Entrance Beach and Karagi sandspit.

Administrator vents over lack of national leadership on coastal erosion