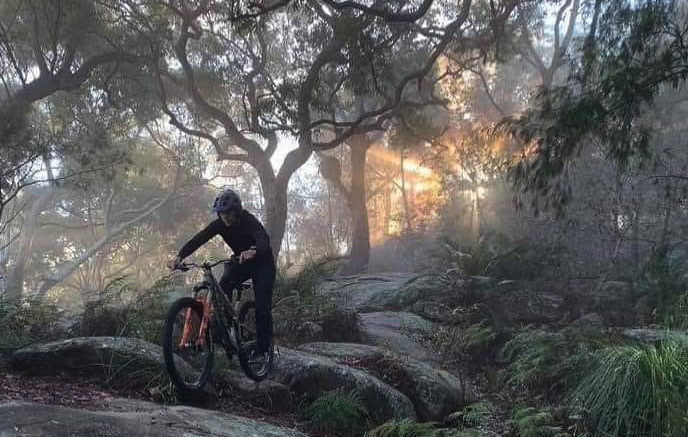 The Central Coast MTB Trail Alliance is calling on Central Coast Council to make positive steps to provide sustainable off-road cycling infrastructure in the region in the wake of an announcement the Council is set to crack down on unauthorised trails.

Council said it had commenced proactive patrols in natural reserves and continues to monitor open space areas for unauthorised bike jump and track builds, with every report assessed by staff for its risk to the surrounding environment, threatened species, heritage values and risk to the public before determining the next steps.

Council Director Environment and Planning, Scott Cox, said Council had received an increased number of reports from the community about unauthorised mountain bike and BMX tracks and structures being built right across the region.

“Unauthorised bike tracks and jumps are constructed without any approval or assessment of impacts to environment, heritage or other reserve users,” Cox said.

“They have the potential to negatively impact trees, native vegetation and the habitat of our local native animals, provide greater access for foxes, cats and dogs into bushland which makes native fauna more vulnerable to predation, alter natural drainage patterns and cause soil erosion or water pollution, damage sites of Aboriginal or European heritage value and attract littering and illegal dumping.

“As the risks are higher in our natural reserves, we have increased proactive patrols by our community safety officers to monitor community compliance with the Local Government Act – the act of knowingly causing these impacts is an offence and penalties may apply to those people found to be responsible.”

“We are taking a pragmatic approach to the informal BMX jump tracks being built in open space areas,” he said.

“This is a very difficult time for many in our community and the current lockdown restrictions in place mean many children are unable to attend school and all formal sport and recreation has ceased.

“If the informal BMX tracks are not causing environmental harm and the risk to the greater public is minimal then we are currently not removing them from open space areas.

“At this moment there is a greater mental health benefit for our children in leaving them as is.

“We will continue to monitor reported sites and if the level of risk increases, we will take appropriate action at that time.”

The Central Coast MTB Trail Alliance says Council destroying jumps and structures without offering an alternative will have negative impacts.

A spokesperson said lockdown had accelerated already rapidly growing participation rates in mountain biking, with a rise in the building of informal infrastructure to meet that demand.

“Recently this has most commonly been seen in many cases of kids in various neighbourhoods creating jumps in public reserves, using initiative and working together to create their own entertainment at this difficult time,” the spokesperson said.

“In response, (Council has announced an) increase (in) monitoring and removal of trails and jumps without providing any suitable alternatives.

“Do we not want our kids to play outside, challenge themselves and build relationships with others and the bush?

“Why is our Council cracking down on this fundamental aspect of being a child?

“Why has Council decided that it is time to expend money and man power by sending out the excavators to flatten jumps and structures built by kids and local cyclists?

“When they offer no alternatives, they simply ignore community need.

“It is time for a paradigm shift from Council regarding how it values kids and adults interacting in natural spaces.”

The spokesperson said destroying dirt jumps would: foster negative relationships between young people and authority; remove people from the bush, limiting the possibility to educate about ecological and cultural significance; and limit access to recreation with subsequent ill-effects on the health and wellbeing of residents.

“With COVID lockdown and no community sports allowed, riding has become a physical and mental outlet for all ages,” the spokesperson said.

“Every time Council finds a trail or set of jumps, it has found unmet community demand.

“Rather, research shows that these sorts of measures only guarantee … an increase in community friction (and embolden) opponents of mountain biking that can lead to dangerous acts of trail sabotage intended to seriously injury and maim riders.”

The spokesperson said peer-reviewed research and cases from around Australia and other parts of the world have shown that what determines the environmental impact of a trail is its planning, construction and management, not the activity that takes place on it.

“As such mountain biking has been conclusively shown to have a comparable environmental footprint to that of bushwalking.

“After 30 years of advocacy by local riders, Central Coast Council is yet to provide a single metre of mountain bike trails or dirt jump facilities.

“It is no wonder that local residents and kids are quite simply providing their own facilities.”

The Alliance has called on Council to extend its engagement and increase commitments to local riders by making positive steps to provide sustainable off-road cycling infrastructure.

“The Central Coast MTB Trail Alliance remains optimistic about working with Council, other land managers and stakeholders to break this negative policy cycle and move towards outcomes that benefit riders, the wider community and the environment,” the spokesperson said.