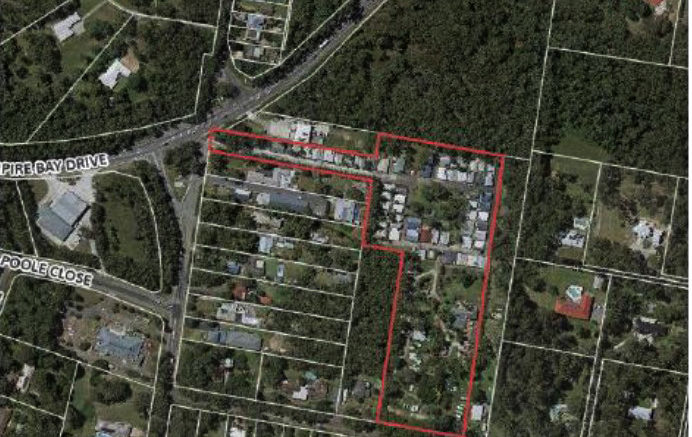 An aerial view of the caravan park

A flood-prone short-stay caravan park at Wards Hill Road, Empire Bay, will be given legitimacy by Central Coast Council for long-term residents and ongoing land use having operated on the site since 1980.

Following advice from the Local Planning Panel, Central Coast Council has moved to ‘formalise’ the existing caravan park by resolving to move forward with a planning proposal.

“This Planning Proposal seeks to enable the regularisation of the long-term caravan park use on the site,” a staff report to the September 14 Council meeting said.

“This will avoid the need for the displacement and relocation of existing long-term residents.

“The Land and Environment Court has determined that the existing caravan park development … has existing use rights for short-term accommodation only.

“The Court of Appeal confirmed this decision.

“Consequently, long-term or permanent accommodation is currently prohibited on the site.

“However, the site has development consent for this use … the validity of which is now in question.

“The site is an existing Deferred Matter (DM) site and will not be rezoned when the Central Coast Local Environmental Plan (CCLEP) comes into effect.

“To deliver the intended outcome, it is recommended to zone the land to E3 Environmental Management and include an Additional Permitted Use (APU) for a “caravan park”, where it can be demonstrated that land proposed for long term accommodation is located outside the areas identified as high hazard flood level,” the staff report said.

The Planning Proposal was considered by the Local Planning Panel on August 19 and was supported in principle.

Administrator Rik Hart resolved that Council prepare a planning proposal to amend the Central Coast Local Environmental Plan (when it comes into effect) to: zone the subject land to E3 Environmental Management; apply the minimum lot size of 20 Ha; and apply the Additional Permitted Use of “caravan park” to the land.

Council will now submit the Planning Proposal to the Minister for Planning and Public Spaces requesting a Gateway Determination under the NSW EP&A Act.

Responsibility for drafting the change to the LEP was delegated to Council staff along with preparation of Development Control Plan (DCP) provisions to support the development of the land subject to the planning proposal.

Community and public authority consultation will be undertaken in accordance with the Gateway Determination requirements, including the exhibition of the draft DCP.

The caravan park has existed on the site since 1980 when development consent was issued for 26 caravan sites which were not to be used for permanent accommodation.

In 1983 another development consent was issued for an additional 33 caravan sites to be used on a short-term basis.

When these consents were issued, caravan parks were a permitted use in the zone at the time.

In 1983, Sydney Regional Environmental Plan No 6 – Gosford Coastal Areas zoned the land so

that “caravan parks” became a prohibited use.

The use of the site approved under the consents of 1980 and 1983 accordingly became an “existing use” under the Environmental Planning and Assessment Act 1979 (EPA Act).

In 2006 Council issued Development Consent to change the use of all existing sites from short-term to long-term accommodation.

In 2017 Council refused a development application for a further 48 long term sites on the basis that: “The site for the purpose of additional caravan sites for long-term accommodation is not consistent with the existing use rights applicable to the land, which exist only for short-term caravan park accommodation”.

The owner took the matter to the Land and Environment Court where the Court found that the site does not benefit from existing use rights for long-term accommodation.

However, the decision and consequential appeal to the Court of Appeal did not expressly offer an opinion as to the validity of the 2006 consent.

The site currently comprises 68 long-term accommodation sites which may not have valid consent, and which are located on land subject to flooding.

The planning proposal would specify that existing and future dwellings are not to be located within High Hazard flood levels.

Most of the existing dwellings on the site are affected by flooding.

“The Planning Proposal will permit long-term affordable accommodation on the land, thus assisting with meeting the needs of the local community in this locality.