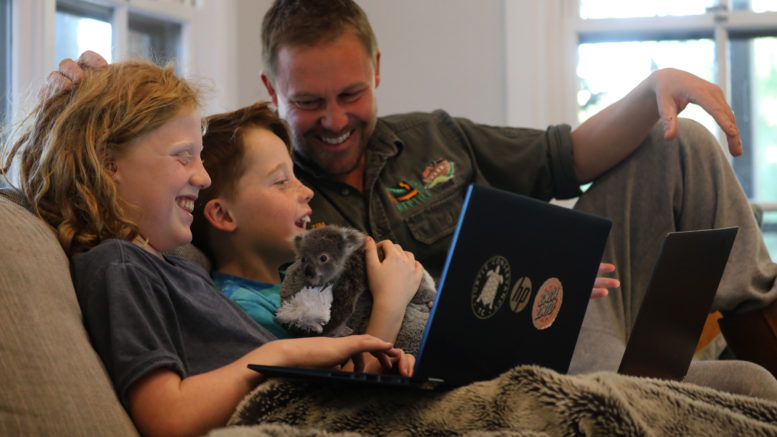 When your Dad is the Director of the Australian Reptile Park, what better to occupy you during lockdown than helping care for an at-risk koala joey?

Keepers at the Park had to make a daring rescue to save the joey, knowing that if they didn’t intervene, the outlook for both the mother and joey were grim.

Park Director Tim Faulkner stepped into the role of surrogate parent to the 300g baby koala.

Working from home looks a little different when you’re caring for a koala joey and running one of Australia’s most iconic wildlife parks.

Between Zoom meetings, online learning with kids and koala feedings every four hours, there’s a lot going on at the Faulkner household during lockdown.

“Now that they’re at the age where they can start developing those animal care skills, it’s been an absolute joy to get them really hands-on with caring for Pixie,” Faulkner said of his sons.

“The boys love helping me with preparing her bottle, feeding her and the all-important weigh-ins to make sure she’s gaining weight every day.

“She just wants to be involved in everything we do at home – she’s so inquisitive.

“She loves to sit with the kids when they’re doing their homework or passing the time with a puzzle.

Pixie has also become an internet sensation, with video of the tiny joey amassing over two million views on social media in just five days as people around the country in lockdown resonate with her story.

Pixie is one of the koala joeys born at the Australian Reptile Park this year as part of its koala breeding program.

Wild koala populations have been in decline for years now and after the Black Summer bushfires, their numbers have plummeted.

Breeding programs like the one at the Australian Reptile Park are vitally important for the future of the species.

Faulkner, who is also President of conservation organisation Aussie Ark said without dramatic intervention koalas could be extinct in the wild in less than 30 years.

“In a couple of years, little Pixie will join the breeding program and become a mother herself.

“She’s the future of her species, alongside the five other koala joeys born during our 2021 breeding season.”