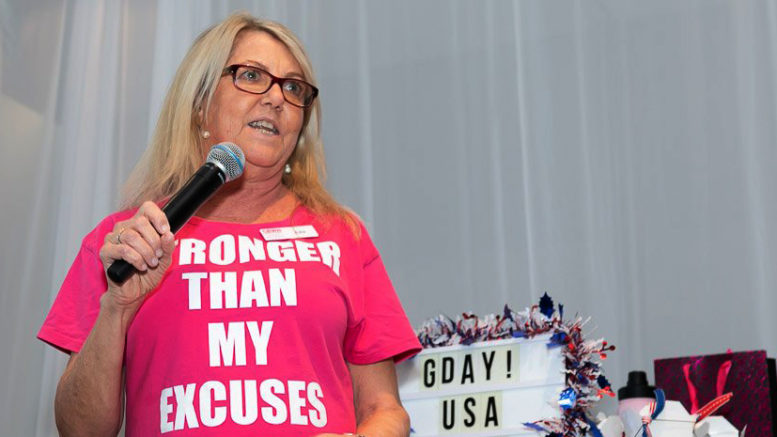 Julie Watson speaking at the Community and Business Women’s Network

The Entrance based entrepreneur, Julie Watson, is one of many contributors that have written chapters for Lake Macquarie based author Joanne Martin’s bestseller book, Innovation Secrets.

The book, which became a number one best seller on Amazon five hours after launching tells the inspiring and powerful stories of thought leaders, innovators and visionaries who are creating a positive paradigm shift in business and life through creative business ideas.

Watson said that she was approached by Martin at a Community and Business Women’s networking event after Watson gave a presentation about her work in creating a media kit for people to run their own web series.

“I met Jo at a Community and Business Women’s Networking event, and she heard me speak at the event and approached me after inviting me to go on a walk and talk with her.

“We went for a walk together and that’s when she asked me to be a contributor to her book.

“I used material from my presentations and website and plonked it into a word document and then straightened it out and sent it off to Jo,” Watson said.

Martin created Innovation Secrets to showcase local and international business owners who see the world differently, are driven by passion and inspired to create positive global change by initiating new ways of doing things, a criterion that Watson easily fits into with her Web TV Show Production Kit, Stronger Than My Excuses.

This kit, which guides users on creating their own online panel discussion show, was inspired by Watson’s own personal hardships, originally creating it for herself to inspire her and others to make positive change in the community.

“My chapter is called hospital bed to entrepreneur and what I want people to take from it is to always back yourself and be confident and push through the excuses we make.

“I had two kidney transplants, a heart attack and I have diabetes, and I have taken action and created Stronger Than My Excuses to give everyone a voice.

“It works by opening up conversations on important social issues and identifying positive actions for businesses to succeed.

“Things that we’ve talked about on the show include suicide prevention, anti-bullying, domestic violence, empowering women, small businesses and much more.

“I started producing the shows just for myself, and I turned it into a production kit and now a year and a half in, we’re starting to grow our YouTube channel,” Watson said.

Living by her mantra of if you can’t see a light at the end of the tunnel, bloody well go down there and light it yourself, Watson is currently planning on expanding her web series into a live event in the new year.

It is available in paperback or Kindle versions through Amazon.