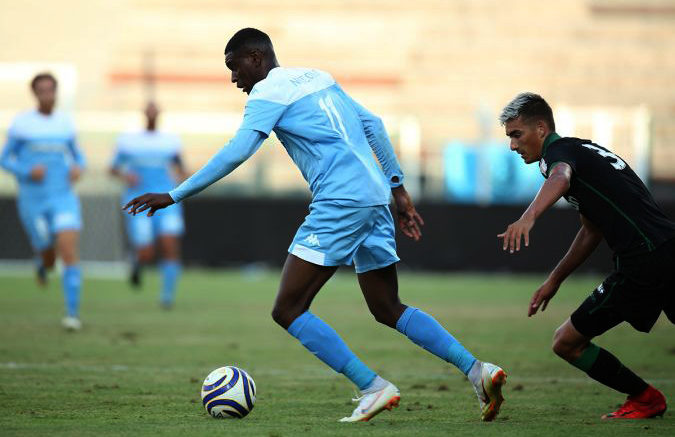 Nkololo has played in France for the entirety of his career, having an impressive season last campaign for US Concarneau, which saw them finish fifth in the French National League.

The French National League has produced a number of talents with the likes of N’Golo Kanté being scouted from the division in the past.

Nkololo has also gained the experience of playing Ligue 2 football with Stade Brestois 29 prior to moving to the Mariners.

He is a versatile attacking player capable of playing wide and central positions and can generate good attacking moments for others as well as himself.

While in quarantine, Nkololo spoke of his path to Australia.

“I was scouted while playing in France and after putting in consistent performances, the Mariners got in touch,” he said.

“Now I am here in Australia and I am itching to get on to the park with my new team mates.

“I have been chatting to Nick (Montgomery) over multiple video calls and I love the ideas he is looking to implement, and I am really keen to contribute and help the club achieve its objectives for the coming season,” Nkololo said.

“We are looking to assemble a strong squad this season,” he said.

“Beni is a powerful, fast and athletic player and I am looking forward to him integrating into the squad along with Cy (Goddard).

“His pace and finishing as well as his positional versatility will be a great asset to us,” Montgomery said.

Nkololo is currently quarantining in Brisbane and will join his new team officially after the two weeks have expired.

His signing follows the announcement last week that Cy Goddard would also being joining the Mariners squad under a two-year agreement.

He is a talented wide attacking midfield player and his task will be to provide the front men with quality attacking moments.