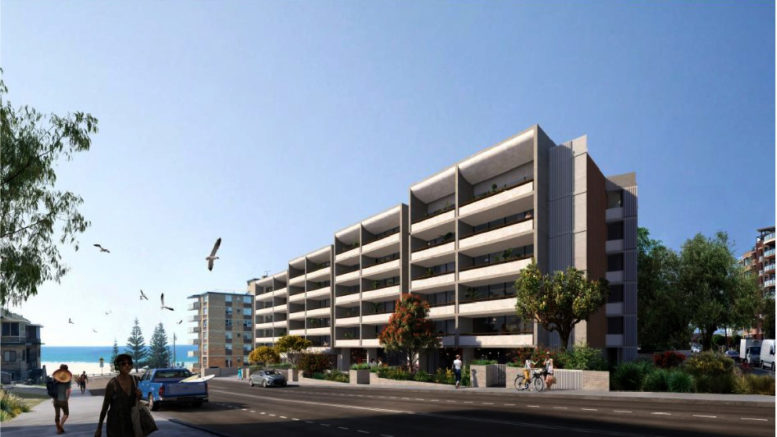 Perspective of the modified development

A proposed six-storey unit development for The Entrance, which was first approved in 2006, goes to the Local Planning Panel (LPP) on Thursday, September 23 with a series of changes to the original plans.

If approved, the site which takes in 2-4 Fairport Ave and 44-48 Ocean Pde, The Entrance, will gain another 11 units in a reconfiguration to take it to 56.

Roof top areas, previously earmarked as private, will become communal and the development will lose the four pools originally planned.

A fifth pool on the ground floor has also gone in the amendments.

Three basement levels for parking have been reduced to two levels with car spaces reduced from 82 to 74 and lifts reduced from four to three.

In a report to the LPP, Central Coast Council says the application is substantially the same development.

During the period of public exhibition, council received 25 submissions.

Common themes were identified in the submissions relating to the height, bulk and scale, overshadowing, views, privacy, noise, landscaping, apartment mix and the original consent.

Council said shadow diagrams indicated a minor increase in building height and greater articulation on the northern and south-western facade would result in some additional overshadowing to adjoining properties.

However, Council said the originally-approved building generally overshadowed the south eastern side of the adjoining property at 50-54 Ocean Pde.

“The overshadowing impacts are generally the same as that which was originally approved with some minor increases and decreases in overshadowing due to the modified roof structures,” Council said.

The impact on views was also considered to be unchanged.

“The impact to views was assessed in the original assessment of the development,” Council said.

“Views from 50-54 Ocean Pde towards The Entrance foreshore and bridge are significantly affected as a result of the approved development.

“All levels of 50-54 Ocean Pde would be affected by the erection of the building.”

Council said it was unable to re-assess impacts that had already been approved.

“Subsequently consideration of the extent of the impact is focused on any additional impact to the views from the proposed modifications,” Council said.

“The proposed modifications include a number of internal and external changes to the originally-approved built form,” the report to the LPP says.

“This has included changes to the dwelling mix, reconfiguration of unit arrangements, refinement of the building’s presentation and type of residential amenities provided based on detailed market advice.

“The resulting key driver has been to increase the number of smaller apartments, including the adoption of adaptable and liveable housing units and the removal of the private terraces on the rooftop and their replacement with a communal area.

The application goes to the LPP with a Council recommendation to approve it.

A decision should be known by early next week.