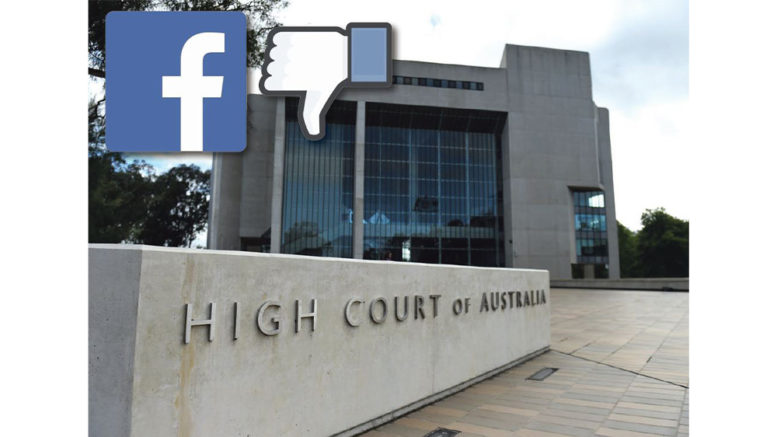 The High Court of Australia has made a landmark decision that will have a substantial impact on organisations that publish the news, including CCN.

They were appealing against a NSW Supreme Court judgement which found in favour of complainant, Dylan Voller, who was suing them for defamatory comments made, not in their actual newspapers or TV bulletins, but on the media companies’ facebook pages.

Social media posts and comments have been the subject of defamation cases in Australia for years now but the action is usually taken against the person who posted the content or comment.

The Supreme Court judgement, reinforced by the High Court ruling, sets a precedent in that the companies that ‘own’ the facebook pages where defamatory comments are made are deemed to be the “publishers” of that information.

Voller was the Aboriginal youth locked up in the Northern Territory’s detention system and shown on a 2016 ABC 4Corners investigation in which he was strapped to a chair and wearing a canvas “spit hood”.

He took defamation action about comments made on facebook about posted news articles that had been published by News Corp, Sky News and Fairfax. The media companies argued they couldn’t be held responsible for comments made by members of the public about their news coverage.

The High Court looked at the issues of: whether a publisher must have an ‘intention’ to defame; and whether the creator of a social media page or feed is also the ‘publisher’ of comments made by third parties or members of the public.

Conventional news journalists and publishers may take the view that there is no difference between a platform such as facebook and a more traditional news channel such as a newspaper, radio news bulletin or TV news.

If that’s the case then it may be surprising that the huge digital platforms – google, facebook, etc – are not considered to be the publishers and therefore responsible for any defamatory content they publish, including third-party comments on posts.

What’s the difference between a comment on a post that’s defamatory and a defamatory letter to the editor?

The reasons for not seeing the platform as the publisher remain unclear – multinational giants like google and facebook appear to enjoy all the upside of news publishing with none of the usual responsibilities to report the truth and ensure the content they publish does not damage the reputations of individuals.

A statement made by the High Court said that each of the appellants (media companies) “maintained a public Facebook page on which they posted content relating to news stories and provided hyperlinks to those stories on their website.

“After posting content relating to particular news stories referring to Mr Voller, including posts concerning his incarceration in a juvenile justice detention centre in the Northern Territory, a number of third-party Facebook users responded with comments that were alleged to be defamatory of Mr Voller.

“The High Court by majority dismissed the appeals and found that the appellants were the publishers of the third-party Facebook user comments. A majority of the Court held that the liability of a person as a publisher depends upon whether that person, by facilitating and encouraging the relevant communication, “participated” in the communication of the defamatory matter to a third person.

“The majority rejected the appellants’ argument that for a person to be a publisher they must know of the relevant defamatory matter and intend to convey it. Each appellant, by the creation of a public Facebook page and the posting of content on that page, facilitated, encouraged and thereby assisted the publication of comments from third-party Facebook users. The appellants were therefore publishers of the third-party comments.”

The consequences of this ruling for news publishers will, no doubt, play out over time but it may have an immediate impact on their inclination to share links to published news stories via their social media pages and feeds.

CCN, for instance, is considering switching off the ability for members of the public to comment on our social media posts, mainly because we don’t have the resources to scrutinise every public comment to make sure it is not defamatory in nature.

We are already encouraging comments on our website where we readily accept responsibility for their accuracy and fairness.

Arguably in the digital space this should be the responsibility of the platform owner. Rather than passively waiting for members of the public to report unbecoming content perhaps it is time for the major platforms to be proactive and spend some of their behemoth profits preventing misinformation and defamatory content from being published.