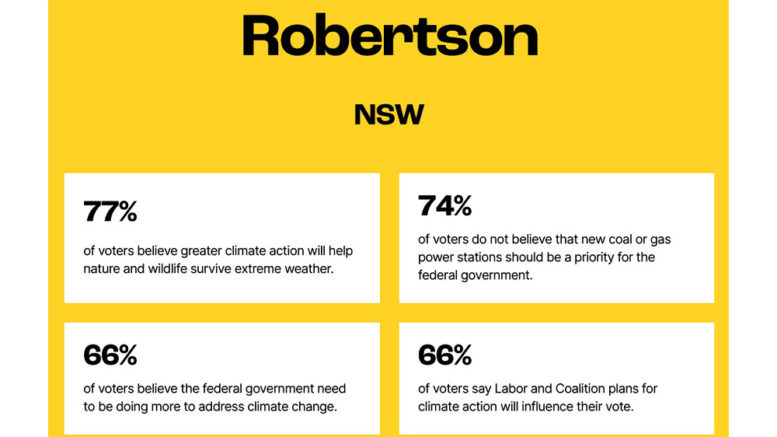 Climate change policy will be one of the biggest issues influencing Peninsula voters at the next Federal Election.

Australia’s biggest climate poll conducted by YouGov on behalf of the Australian Conservation Foundation found that a majority of voters in all 151 federal electorates believe the Government should be doing more to stop climate damage.

Almost three quarters (73 per cent) of voters believe the government should set a target to reach net zero emissions before or by 2050.

Almost three quarters of voters in Robertson (74 per cent) think new coal and gas power stations should not be a priority.

ACF CEO, Kelly O’Shanassy, said as Australians continue to recover financially, economically and emotionally from the Black Summer bushfires of 2019 and 2020, we have seen climate disasters playing out in the northern hemisphere summer.

“On our TVs we’ve seen heart breaking damage and death from bushfires in Turkey, Algeria, the Greek island of Evia, Russia, the USA and Canada (and) a village in Italy endured a 48.8°C day,” he said.

“In the back of our minds we know this could be a glimpse into our own coming summer or the one after.

“The world’s top climate scientists warn of worse to come if we do not dramatically curb climate pollution now.

“ACF wanted to take a temperature check on Australians’ views about global warming, so we asked respected pollsters YouGov to conduct the biggest and most in-depth survey ever undertaken of Australians’ opinions on climate change.”

YouGov polled a nationally representative sample of more than 15,000 Australian voters on a range of questions on climate change and government action.

Then, using the multilevel regression with post-stratification (MRP) method, YouGov made forecasts across every electorate in the country.

The MRP tool combines the polling data from the 15,000 respondents with census data such as population density, education and household income, allowing the poll to be broken down by electorates as well as demographics in a statistically reliable way, O’Shanassy said.

“The poll results reveal a groundswell of voters flagging climate change as a key election issue and continuing widespread support for clean energy solutions,” he said.

“A majority in every federal electorate in the country wants our national government to do more to combat climate change.

“The latest science shows we need to get to net zero emissions in the next 15 years; 2050 is too late.

“What matters is slashing emissions this decade.”

O’Shanassy said the Federal Government’s position will be a sore point at the United Nations Glasgow climate summit in November, where leaders are expected to bring

stronger commitments to the table.

“If we begin now, industrial hubs in Queensland could be pumping out green hydrogen, steel and aluminium within the decade.

“Inland regions could be generating clean energy from the sun.

“Across Australia, clean energy, in tandem with farmers’ moves to make agriculture sustainable, can turbocharge our economy to make it the envy of the world.

“But we desperately need national leadership to coordinate this push.”