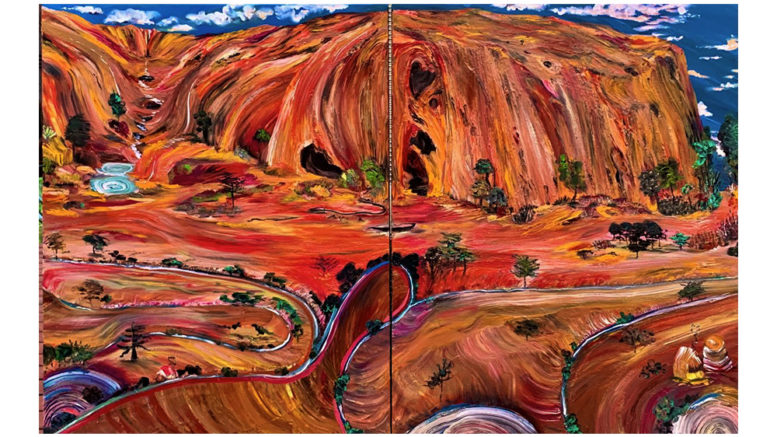 The Awakening by Carmen Jackson

Carmen Jackson of Tumbi Umbi has been selected as a finalist in the inaugural National Capital Art Prize with her oil painting titled The Awakening.

She is one of 121 finalists narrowed down from over 1,000 submissions from across the country.

Jackson said that the two-panel oil painting only took her a few weeks to paint and was inspired by the beginning of time.

“I created The Awakening based on Uluru, and the Amadeus basin and it’s about the beginning of time and ancient Australia,” she said.

“It has an Aboriginal influence, reflected through the middens depicted.

“The Awakening is also a prelude to natural immunity and how [I think] it is better than the vaccine,” Jackson said.

The painting, which is entered in the Open category, is currently on display in Canberra at Federation Square where it and the other finalist pieces will be judged by a panel to decide the four category winners which will be announced in October.

Following the announcement of the winners, their words will be displayed in a public exhibition in Canberra.

“I saw the entry form for the National Capital Art Prize online through Gallery 247 and I decided to enter the painting about two weeks ago.

“Cathy at Central Coast Picture Framing did the floating timber framing for the painting, and it looks fantastic.

“I’m really excited to go down and see it, but I don’t know when that will be.

“I’m a little bit disappointed I can’t get down there to see it, but lockdown is making that a bit difficult.

“I hope that when people see my painting they see an appreciation of Australia.

The Coast can support Jackson by voting for her painting in the People’s Choice Award up until September 30.

The winner of the People’s Choice Award will receive a cash prize of $2,500.

The National Capital Art Prize is making Australian art history as the only art competition to allow entrants to paint any vision, such as a portrait, landscape, abstract or any subject.

Every state and territory has a finalist in the four main categories which include Open, First Nations Prize, Landscape and Student.