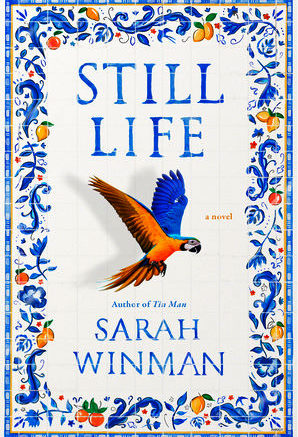 Italy 1944. The Allied forces are waiting to enter Florence. Ulysses, a Private with the British Army is driving a jeep to pick up Captain Darnley.

In a wine cellar of a Tuscan villa, as bombs fall around them, Ulysses meets Evelyn Skinner. Evelyn is a middle-aged art historian, who has travelled to Italy to offer her services with identifying art that has been located after taken from churches and museums.

Their encounter is brief but will bloom into an everlasting friendship.

Peg, the wife of Ulysses is in London.

Peg and Ulysses don’t write to each other, and pretty much only got married because he was going off to war.

But he adores her and sends her money.

She is working in a pub owned by Col – a curmudgeon if there ever was one.

Peg could be trouble, but she brought in the soldiers … she was gorgeous.

Everyone had a soft spot for Peg.

Especially Cress, who looked out for her and made sure she got home when the drinking got out of hand and Pete that played the piano when she sang. “She had class, she may have stolen I, but she had it.”

But Peg has her sights set for bigger things – like Eddie, a soldier with the US Army.

The war is over and Ulysses heads back to London to find Peg pregnant.

Eddie is nowhere to be found.

She asks Ulysses for a divorce, but they remain close.

Life goes on for a while until Ulysses finds out he is the beneficiary of an apartment in Florence.

He decides to move there, Peg asks him to take Alys, her daughter.

Peg isn’t fit to be a mother.

Cress decides to come along for the ride and smuggles in Claude “a large blue Amazonian parrot.”

Peg stays in London hoping and praying the Eddie will resurface.

But she eventually gives up hope and marries Ted – it will not be a good union.

Meanwhile Ulysses and Cress will stay in Italy and raise Alys and open a little hotel and meet some colourful characters.

But Claude, the blue parrot, will remain one of the story’s most colourful characters.

The story stretches four decades, 1940’s through the 70’s and will cover a lot of the events that happen in those years.

In particular the 1966 flooding of the Arno, which I (ignorantly) knew nothing about.

There is art, philosophy, food.

The tale alternates between Ulysses and Evelyn and the few times their lives almost intersect.

Until they finally do of course.

The characters are full and rich and generous and loving.

There are friendships that will grip you and lose that will break your heart.

All are seemingly disparate individuals except for the fact they are connected to Ulysses, a gentle compassionate man who has fought for his country, stopped a man from suicide and take on looking after Peg’s daughter.

Near the end, the story diverts into Evelyn’s past.

I found that a little distracting … maybe it needed more of a lead-in earlier, or maybe there is another book in Evelyn’s story alone.

Too many EM Forster references? Then, to fool me with Constance Everly.

It was a bit long, but the writing was so beautiful and, throw in images of an idyllic Florence setting, and I almost didn’t mind.