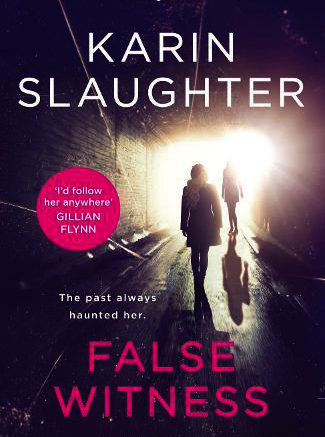 Callie is fourteen and babysits for Trevor since Trevor’s parents, Buddy and Linda, are busy working.

Callie’s older sister, Leigh, previously babysat for Trevor as well, but she went onto other jobs and recommended Callie.

That decision would set about a series of events which would haunt the girls for the rest of their lives.

Callie and Leigh are really Calliope and Harleigh (you can see why they have shortened their names).

Their mother is known as Phil, an ex-felon who carries a baseball bat as she is forbidden to own a gun.

So effective is she with her Louisville Slugger she has earned the nickname after a famous baseball player, Phil Rizzuto.

Phil was not mother of the year material and the girls were abused, but Phil doesn’t see it that way: “That is how it was with abusive parents. They only remember the good times and you only remembered the bad.”

While Callie’s life was one of addition and homelessness, Leigh’s life took another route. She became a defence attorney and met a great guy, Walter and is raising a daughter, Maddy, who is 16.

Recently however, cracks have emerged, and Leigh’s life is a little off the rails.

She in in the process of getting divorced and she can’t seem to communicate with Maddy.

Thank goodness there is social media so she can follow her.

Leigh has also been forced to take a job at a corporate law firm.

The extra money was needed to help pay the private school fees for Maddy.

While Callie and Leigh aren’t in each other’s lives they do meet up every so often, or basically when Callie needs help.

One day Leigh is summoned to the top floor of her employer, a floor reserved for the partners of the firm, which she is not.

Andrew Tenant, from the well-off Tenant Automotive Group, one of the firm’s biggest clients, has been accused of rape.

Turns out that Andrew is Trevor, the boy she and Callie used to babysit.

He found Leigh through a magazine article and now wants Leigh to be his lawyer.

Andrew reveals a secret that Leigh thought would be hidden forever.

This book is the first one I have read with the pandemic as a backdrop.

And even though we live with it every day I found it a bit off putting, which I know sounds stupid (but I read to escape these things).

In a letter to the reader, the author explains that she “wanted to incorporate the SARS-CoV-2 pandemic, but I also knew that the story was not about the pandemic so much as about how people are managing to live through it.”

Reading the first chapter will give you an idea of what is to come.

It isn’t easy reading as the subject matter is so confronting, but it is timely.

Even though I found it difficult to read some sections, it is still one of the better books I have read this year.