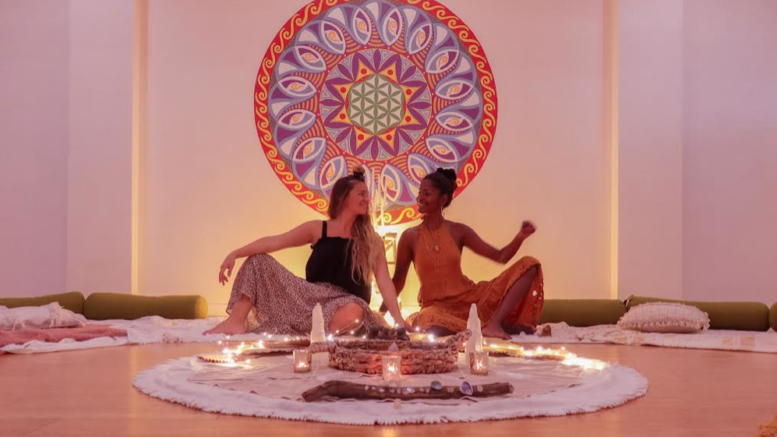 Arjanna Chitranjan (right) in her studio.

In interview by Ellen Rubbo –

I’m sitting with Arjanna, a Srilankan woman who lives in Avoca beach. Arjanna is a yoga teacher who runs women’s circles and who feels so lucky to be in Australia.

Having a mum who was academically minded, Arjanna was encouraged to leave Sri Lanka and go abroad for her studies.

Once arriving she had some serious health issues and was forced into a massive pause with her life.
This is when Yoga solidified for, having already having a practice, she took on studies to deepen her
knowledge.

Arjanna explains everything we do is yoga, and she sees her women’s circles such.

“Women’s circles to me are a very interesting part of yoga. I’d like to make the distinction, that in
my women’s circle I mean a feminine circle, so it embodies the feminine in you and I, as well as all
the way up to the hetero sexual male”

“I think the world would be a better place if we leaned into our feminine, and it’s just about showing
up and being present, this is yoga”

“There is a lot of healing to do in both genders but it feels accelerated in women because of the way
we share with each other so easliy. When women are presented with the opportunity or space to
come together with meaning and intention, the magic seems to unfold”

“We all have the feminine and masculine inside of us, but somewhere along the way the masculine
has dominated, we all want to do things, achieve things and have goal oriented living, so the
feminine has been pushed to the side. It’s not the absence of strength, we are still warriors, but the
strength of the feminine is not celebrated”

I asked Arjanna if she could explain to the listeners who aren’t even aware of the polarities within us,
what she thinks the difference are.

“It’s really like yin and yang. One cannot exist without the other. It’s Shiva Shakti. Yang is essential,
it’s the powerhouse, it gets us out of bed and gets done what we need to do, and the feminine is the
Luna energy, it’s the feeling body, the intuitive-self and mystery. That doesn’t really have a dialogue
right now in our culture. There’s a lot of people who will tune out even when speaking about it, but
its important work”

I discuss with Arjanna how women are cyclical creatures. We are not meant to be active every single
day.

“Absolutely. The circles birthed out of a representation of the cycles within us, paralleled with the
moon, so every full moon or new moon. We gather on the new moon.

We identify more with cycles in nature in our circles. Cycles we can break, cycles we can create,
cycles just from being in a circle.

There’s a lot of spiralling happening in life and we are there to honour it. We try to make it incredibly human as well as mystical, because some people are coming from two kids at home or full day at work, and it can be hard to arrive to a space to share in that state. So we welcome it all”

I asked Arjanna what were some of the most predominant spiritual cultures in Sri Lanka.

“I just remember life being full of colour. Regardless of what the religion was expressing that colour,
we had Buddhists, they were the predominant religion, we had Hindus, Christians, I grew up catholic
and there were people of Islamic faith. I remember feeling like wow there’s so much to celebrate
every day.

There was a lot of ritual growing up around me. For example in Sri Lanka on the full
moon, everyone gets the day off! I’m going to do that one day with my employees in my company.
When I came to Australia I was surprised it wasn’t done here.”

All of this colour and ritual has definitely influenced Arjanna but she says she takes no credit for the
magic that happens in her circles.

“The patterns just happen, we have women who come and are in transit with their lives, whether its
relationships, marriages, travel or from maiden, to mother to crone… These patterns keep showing
up and we are there to hold space. Sure we provide some mediations and ritual but the rest of the
magic just happens just by sitting in circle”.