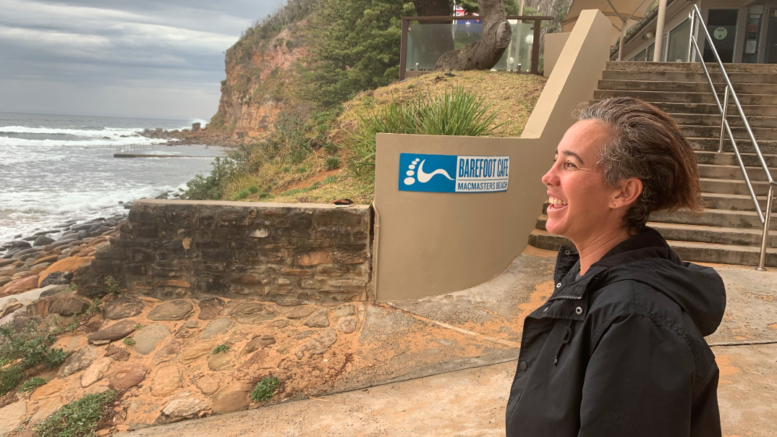 Amee Donohoe at MacMasters beach where she witnessed the great white shark.

Macmasters Beach: Local surfing personality Amee Donohoe has had a harrowing close encounter with a great white pointer off the point at MacMasters beach this week.

Donohoe, a past professional surfer and founder of the Central Coast Surf Academy was surfing off the point on Monday after lunch “for another little paddle” when she and a fellow surfer witnessed what they described as a sizeable great white shark, that breeched, teeth bared only metres from where they were.

Amee has surfed some of the worlds biggest waves, however the former Hawaiian Triple Crown star puts this experience down as one of her most exhilarating rides.

“It’s such a unique experience that [I’m] one of the few people that have seen a great white shark so up close” said Amee “it’s a phenomenal experience to see though of course it’s also quite intimidating”.

Amee and the fellow surfer turned for the rocks and cluttered up onto the rock shelf, cutting up her legs and feet. “The adrenaline is going a million miles and hour.. I didn’t feel anything..”

Donohoe is committed to getting back on her board as soon as her injuries have healed.

Amee’s GP, a local surfer herself gave her some sage advice to heal the trauma; grab a box of chocolate and eat it while replaying the drama.

Having  lived and surfed in and around the Central Coast for over thirty years she’s seen a few grey suits (sharks), though said they’re part of and parcel of surfing life.  She said all surfers know the risks, though after this, says she thinks more of her family and children.

See the full video interview with Amee at the video-news section of the CCN website.