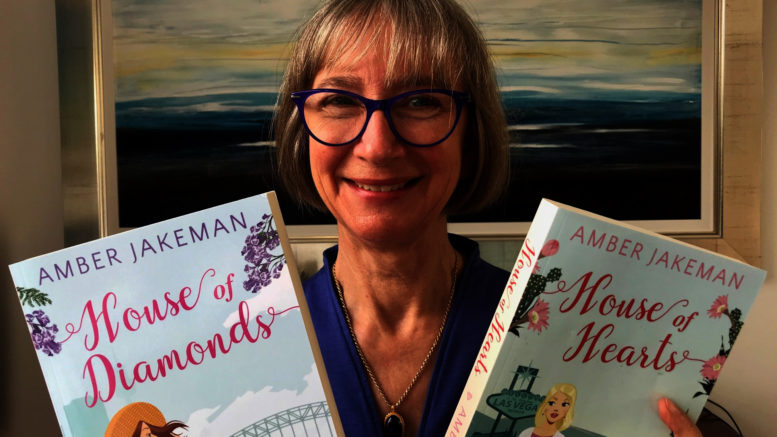 Amber Jakeman with two of her novels

Ex-patriot Coastie Amber Jakeman has been writing up a storm during lockdown and has just published the third book in her series House of Jewels.

Jakeman, who worked as a print journalist on the Coast for almost a decade, now lives at North Sydney, but was a frequent visitor to friends and family on the Coast prior to lockdown and maintains strong ties to the area.

After decades of working as a journalist for newspapers, government department and schools, Jakeman now juggles her day job at the International Grammar School in Ultimo with writing fiction as she realises a long-time dream.

“I have always loved fiction,” she said.

“I love it as a form of escapism and I particularly like fiction which has an uplifting ending.

“It has always been in the back of my mind to write fiction myself.

“I wanted to do it when I was younger but didn’t have the life experience or time.

“I finally came to a period in my life, with my children grown, where I could devote time to it and took a short break in my career during which time I wrote five books.

“I discovered the words flowed easily but I had a lot to learn about structuring a novel and character arcs and it is only in the last couple of years that I have felt my books worthy of being published.

“I worked part-time for a while and workshopped the first novel in my series, attended conferences and worked on my writing skills.”

The result is the House of Jewels series, with three titles published and two more in the works.

“I have always been drawn to jewellery market stalls and I had a vision for a storyline involving a woman who sets up a small jewellery stall in front of an established high-end jewellery store,” Jakeman said.

“I found the idea compelling.”

Jakeman began to craft her series around the contrasts and clashes between stall holder Stella and owner of the three-generation jewellery business James, resulting in a series which follows not only these two protagonists, but their extended families, across three continents.

“The books are intertwined so they can be read in any order,” she said.

The first book, House of Diamonds, establishes the main storyline, with the second, House of Hearts, following James’s bad boy brother to Las Vegas and beyond and the third, House of Spades, is set in the Byron Bay hinterland and introduces Stella’s free-spirited mother.

Jakeman is now working on the fourth title in the series, House of Clubs, which will introduce the story of James’s mother and is set largely in France and a fifth novel, Full House, will bring all the characters together in what Jakeman describes as a “showdown”.

“I like to think of what I write as feel-good fiction,” she said.

“It’s basically romance, but there is a huge range of books in this genre – my work has been referred to as sweet romance.”

Jakeman said she was steadily building a readership and had been amazed to attract readers from all over the world.

The House of Jewels series is available in paperback or ebook from Amazon.