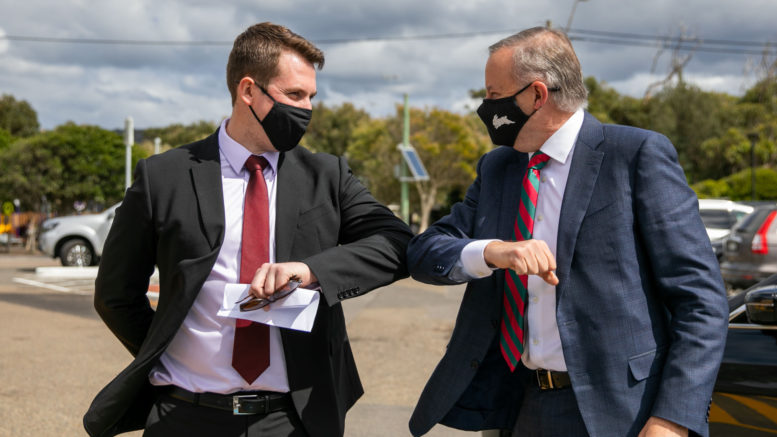 Local doctor and Wiradjuri man, Gordon Reid, has announced he will stand for the hotly-contested seat of Robertson at the next Federal election as a Labor candidate.

Reid was joined by the Leader of the Australian Labor Party, Anthony Albanese, Labor Senator Deborah O’Neill and Member for Gosford, Liesl Tesch, on Monday in front of Umina Surf Life Saving Club to confirm his candidacy.

Spending the last five years working as a doctor at Woy Woy, Gosford and Wyong Hospitals, the 29-year-old said he felt honoured to stand for election in his hometown.

“I’ve lived and worked on the Central Coast for my entire life,” Reid said.

“I know there is a lot of hard work ahead and I’m fully committed to doing my very best to highlight local issues and get a better deal for our community.

“My family has been involved in the Labor party on the Central Coast for three generations and it was Labor values that brought me to a career in medicine and caring for others.

“As a local, I understand what’s important to our community and I know firsthand that the Central Coast wants someone to represent them and to let their voices be heard in the Federal Parliament.”

Reid grew up on the Peninsula, starting his education at Umina Beach Public School, before moving to Central Coast Grammar.

He then went on to study Medicine at Newcastle University before taking up work at the local hospitals, and more recently, as an emergency doctor during the COVID-19 pandemic.

He said it was this work that will help shape his policy decisions.

“I will be advocating for the health needs of residents, supporting increased access and increased affordability of primary care and general practitioner services which is of particular importance here on the Peninsula.

“It’s sitting down and talking with our local GPs and finding out how best we can support them and how we can improve patient access to their services.

“I had a shift just prior to this latest lockdown, and there were almost 100 people in that department and there was a significant proportion of them that were there because they couldn’t get in to see their GP, or they couldn’t afford it because they’re no longer bulk billing.

“I will be a champion for better health services for my community and a strong advocate for good local jobs in the region.”

“This is an amazing candidate for Labor, and I want to thank Dr Reid for putting himself forward, for having the courage to stand for Labor at a Federal level,” Reid said.

“Reid represents the best opportunity to have serious representation here on the Coast.

“He’s a proud Coastie, he will bring that health expertise and experience to our national parliament and I’m very proud to announce him.

“I’m very confident that we can win this electorate.”

Despite sitting Member, Lucy Wicks, increasing her margin to 4% at the last election, Reid said he was confident in securing enough support to win the seat.

“I’m very confident because we are going to be listening to the issues in the electorate,” Reid said.

“Coasties deserve better than an invisible MP who has failed for eight years to deliver for our community and stood by watching as we’ve been continually overlooked.

“The Government, along with Lucy Wicks continues to advocate for change but they’re only delivering excuses.

“The Government has failed on the vaccination roll-out, failed on health services, failed on aged care and failed on PEP11, and most importantly failed to deliver adequate economic support for our communities.

“[We are] going to listen to their concerns and move forward and progress the Coast with a bold, new fresh vision.”

Reid will run against Federal Liberal Member, Lucy Wicks, who has held the seat since 2013.